Arrgghh – what a month 🙁

I can’t remember a month like it – rivers high, winds strong, tides all wrong, fish hooked and lost – just piss off February 2020 I hope I never experience another month like it.

It all started to go wrong at the start of the month when I managed to snatch a few hours on the lake behind my house. I had an hours circuit of the lake, flinging out a YoZuri floating minnow and had two pike roll over / attack the lure during the final moments of retrieve but neither time did I get the hooks to hold.

Another hours walk around the same lake the next day saw me change lure to a size 5 Ondex Red Tag – this time I only got one take from an unseen but solid fish. I was with my daughter Kate and thought it would be a good time for her to play and land her first decent pike, but as I turned round to call her over the fish shed the hooks. Gutted wasn’t the word it was a much bigger fish than usual from this prolific “jacks” pond.

Weather and work then put a halt to any further piscatorial activity – but did allow me time to thoroughly research the fishing in and around Minehead which was my half term destination with the family.

Online – it looked idylic – a  fishing tackle shop on the harbour, and beaches that regularly produce decent conger, codling and rays during winter months, and a variety of skippered charter boats from Minehead Harbour. – What could go wrong ??  Ha ha..

So – on arrival at Butlins – I found it difficult to extract myself from the bosom of my lovely little family. Until Mrs Fishingfiend noticed my face getting longer and longer as the days passed. So… with spousal consent I was let off the leash for a few hours one afternoon. Tide was all wrong, tackle shop was shut for the day, the pebble beach turned into ankle breaking boulder beach, and using a whole squid on a pulley pennel rig – I launched a 6oz lead out as far as I could into the teeth of a Bristol Channel Force 7 hooley.

Now can you imagine my surprise when after about 45 minutes I got a tap tap tap on my rod tip.

Here’s a few photos of this lovely fishing spot (did I mention it started to chuck it down as I was tackling up ?) and then I’ll continue with the rest of this lack of fishy tale.

Anyway – thats enough of the view. My rod tip was tapping away so I struck and could immediately feel a good solid resistance. Yessss I’m in.  I played the fish for a good 5 minutes and got it in to the surf/boulder zone.. It was a lovely ray, a good fish pushing double figures.. and then it disappeared from view and everything locked up solid. My rig snagged up tight in the rocks. I let the line go slack for a good while but to no avail. The tide was coming in fast so I cut the line and tied it to a rock – hoping that the fish might free itself and I would be able to hand line it in, or in worst case scenario – i could come back as the tide was ebbing and collect both fish and rig. I came back early that evening to check as the tide was going out – and there was no sign of line, rig or fish.

I carried on fishing until my allotted time was up – without any more fish action, but lost another rig at the end of my last cast and was pretty cold and wet by the time I retreated back to the car. All in all it was a pretty crap session.

Next day – the weather improved a little. So I again got the nod to have a few hours on the rods.

It was high tide at 5.30pm as i set up at 3.30pm on Blue Anchor Beach. This location had a flat sandy bay backed by a steep shingle bank – a classic high tide only mark. But with there being only sand in front of me I was safe in the knowledge I wasn’t going to lose much tackle to the sea. Again I used a single rod, squid as bait to a size 4/0 pulley pennel rig. 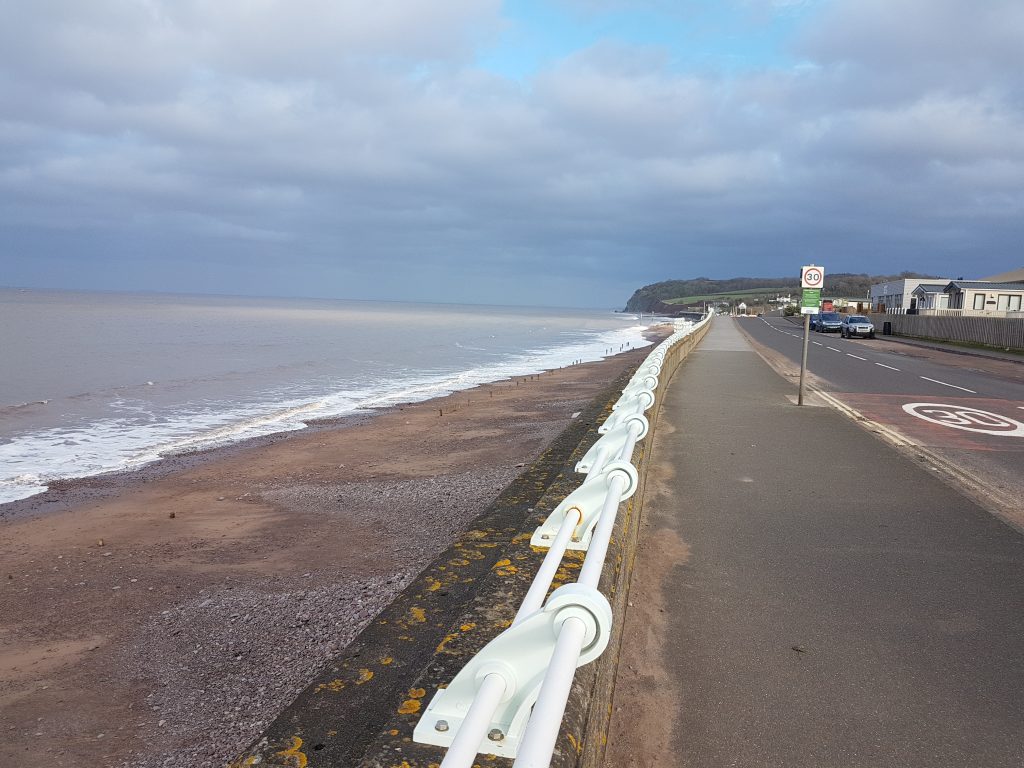 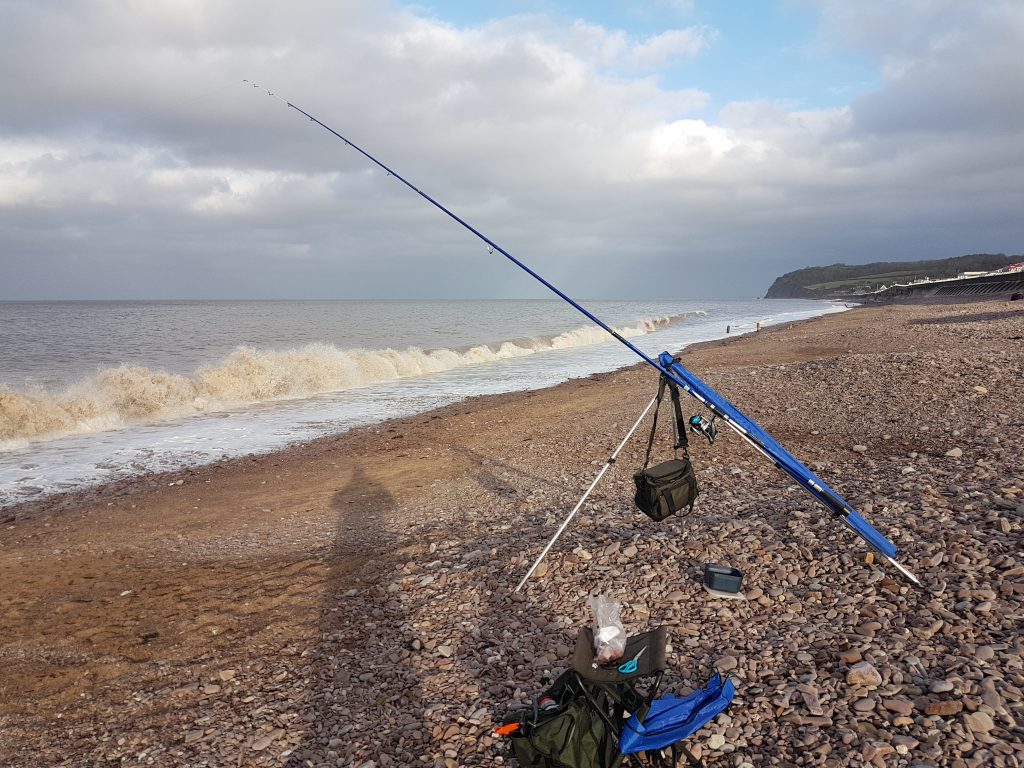 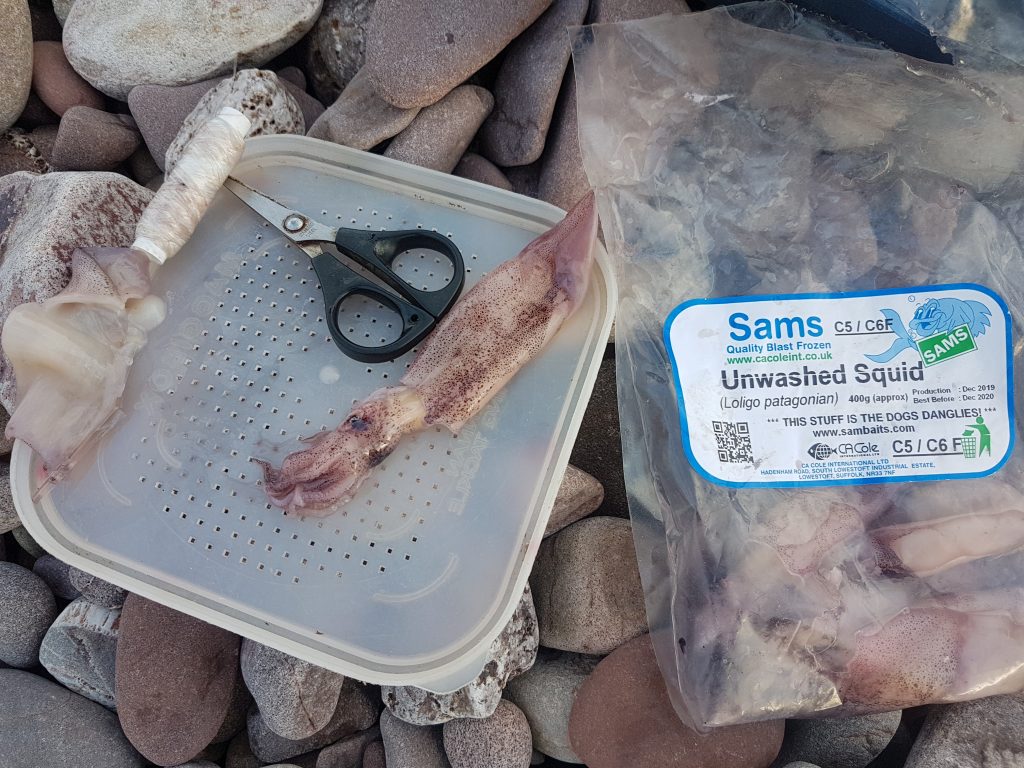 Lets cut to the chase… there were 4 other anglers on the beach – so I blanked in good company. Not a bite, a twitch or a sniff.

A good angler never loses his mojo though – so despite my lack of success I took the opportunity to take my family out for a bit of fresh air and a country walk to help them escape the wonderland that is Butlins at Minehead.

A short trip out to Bossington Beach (another local mark of note) was our destination. The wind took our legs away as we crossed over the top of the shingle beach bar.  I took a couple of quick photos as an “aide de memoir” for any future trips to Butlins – but my daughter Kate who was celebrating her 5th birthday (take note of fairy face paint and fairy dress in photo below) soon persuaded Daddy that it was too cold and windy to explore any further.

And that was it. Piss off February 2020 – the worst fishing month of my life.