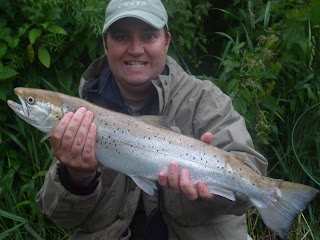 Congratulations Phil-K, the 4.8lb sea-trout above was the highlight of an extemely enjoyable evening on the river.
I am still unable to shake off my dose of the yips, as i lost two good fish this evening the first with a hook snap off the second to an 8lb hooklength parting.
Whilst i could wallow in self pity – i am instead thinking about how to refine my technique and hope for a change of luck. The loss of these fish certainly didnt spoil a great evening, as Phil caught yet another cracking Barbel from the “hot” swim.
Towards the end of the evening i used Tonys rod and was able to experience for the first time the Rolls Royce performance of his centre pin reel. The smooth peel of line that is the essence of the pin, makes an immeasurable improvement over the jerky movements of a float that is being controlled by a fixed spool reel. This improvement in presentation of the bait became immediately apparent on the first run through the swim using Tonys gear. I had a bite first cast, a fish hooked (but lost) on second cast and another hooked and lost within 2 or 3 casts after tying on a new hook.
Fishing with Phil and Tony is always good fun, and tonight proved no exception. As the light was fading at about 10pm, Phil had returned to his car expecting us to follow shortly. However, Tony was insistant the we fished on despite the fact that the light had gone and i could no longer see the float when it had travelled more than 10yds down the swim. To counter this lack of light, Tony walked half way down the swim so that he could see the float when i couldnt. The shouts of faster, hold back, strike, re-cast echoed through the darkness. I could hardly hold the rod through laughing as i wanted to pack up but could hear Tony through the murky dark shouting “come on 2 more casts” about 5 times. I didnt hook any more fish, which is a good job really as i was crying with laughter. Tonys enthusiasm is infectious.
Again congratulations to Phil, he has taken some cracking fish this summer, i hope he catches many more.
manchester fishing Irwell Ribble Trout