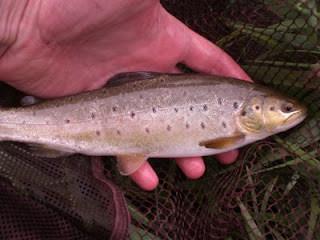 I spent a very enjoyable evening with Phil fishing of the mid-river lengths of our local river, it was especially memorable evening for me as my father who lives only a couple of hundred yards away decided to come and watch us fish for a few hours.
It was my dad got me hooked on angling when i was only 7 years old, so its a pity that he rarely picks up a rod these days. After a couple of hours watching Phil and me catching a chub a chuck he is now raring to go fishing this weekend. Hopefully there will be three generations of my family out fishing together for the first time in ages.
This evening I was the first to arrive and caught a nice wild brownie first cast. However i very nearly packed up in diusgust 20 minutes later when i hooked and then lost the mother of all trout. I hooked into the fish and its initial run bent my rod over like a hoop and stripped 20-25yds of line off the reel. It then performed some acrobatics, and proceded to swim back up river towards me. I felt great as i was gaining line on the fish, but as soon as the fish saw me and the net it turned a ran again this time snapping my 3.5lb hooklength. I was gutted. Even though i saw the fish i am not going to estimate its weight other than to say it was big.
Despite loosing that fish I was getting bites steadily all evening fishing maggots and using my new bait dropper to feed the swim. The swim i had chosed to fish was at the confluence of the main river and a smaller shallower tributary. Where the smaller river joined the main river there was a shelf and drop off so i fished this drop off as it seems as though its a natural fish holding area.
When Phil came he fished slightly upstream of me, and caught steadily too, though he had no luck with the trout he caught chub for fun all evening long.
Midway through the evening i decided to try the swim behind the island to see if i could tempt one of the larger chub that i think might reside there. After only couple of runs through, the float buried and after some more acrobatics i landed another brownie of about half a pound. 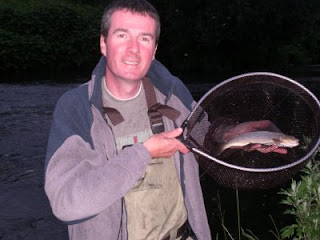 My dad was chuffed to bits to watch me catch this lovely little fish, amazed that the river, once so polluted can support a thriving population of oxygen loving fish such as trout and minnows.
As the evening drew to a close i re-joined Phil, and we caught a few more fish together. I didnt fish on until dark as the mosquitos were out in force, ignoring the DEET which i have finally resorted to using.
If i hadnt hooked that big fish in the first place i would be sitting here at home now feeling great after a very enjoyable evenings fishing. Seeing as though i lost the biggest trout i have ever seen from this river i am sitting here wishing i had tied a different knot, used a stronger hooklength, held my rod higher, set my clutch slightly lighter etc etc.
Gutted.
manchester fishing Irwell Ribble Trout