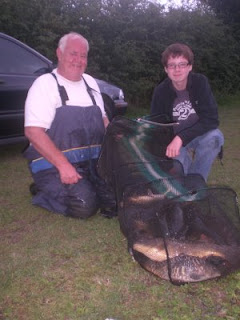 When we asked Matt which lake he wanted to fish on our second day, he of course wanted to fish the lake we had fished the previous day. A quick trip to the local village to purchase every tin of sweetcorn we could find and we were away.
I caught 10 carp in the first hour, then things slowed down somewhat. Dave and Matt were having alot of success using prawn as hookbait, and were catching a better stamp of fish as a result.
I “borrowed” some prawns from Dave and also found an immediate improvement in the quality of fish i was catching. I turned to thank Dave for the prawns, only to see the end of my pole shooting off into the lake. I stood shocked as my pole was pulled further and further into the centre of the lake and at the same time slowly sinking deeper and deeper. As i have owned this pole for less than a month and it cost me a fair few quid, there was only one thing to do – 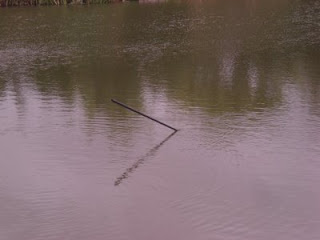 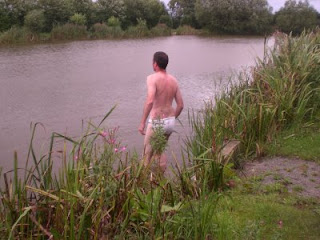 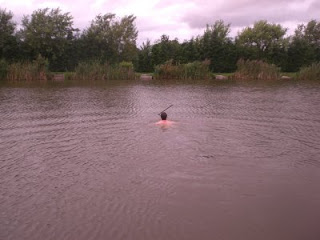 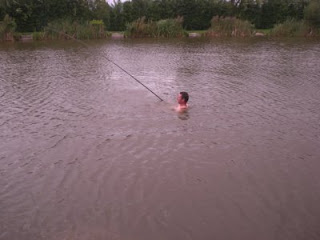 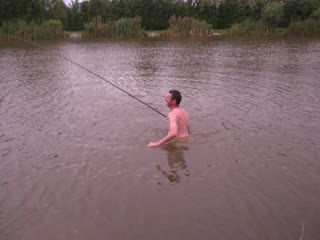 I was lucky to get the pole back as when i reached it there were only about 6 inches left above the water. The fish was still on and i played it as i swam back to shallower water , but it got off as i neared the bank. Dave, Matthew and the two other guys fishing the lake were in fits of laughter, but the water wasnt too cold and that pole wasnt cheap and i didnt think it would be covered on my house insurance for that (funny thing was that for all Daves laughing the same thing happened to him two days later, but he didnt get wet as his pole immediately sank without trace).
The fishing was absolutely cracking and we all caught a great mixed bag of fish including rudd, perch, gudgeon, tench, bream and carp. Matt loved it and is now absolutely hooked on carp fishing. I also had another first when i caught a fish on a bare hook – a crucian of about half a pound.
At the weigh in at the end of the session Dave won again with 78lbs, i had 50 and Matt a very respectable 22lbs.
A cracking venue, great company and somewhere i will be able to take Matt to in future.
manchester fishing Irwell Ribble Trout