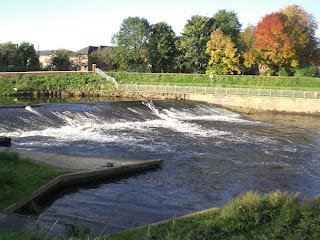 My original intention was to spend the whole weekend fishing the EA beats on the Ribble, however a late phone call from Matthew telling me he wanted to spend the weekend with his Dad made for a hasty change of plans. Matt is captain of his rugby team and now lives and breathes his new found passion in the same way i do with fishing. So my weekend is now taken over by a funny shaped ball and i will be watching Sedgley Park vs Lymm this afternoon and Matthews under13 team vs Broughton Park tomorrow.
So today rather than a full day on the Ribble i had a dawn start at the weirpool on the Mersey. Again i spent the morning flinging spoons, plugs and spinners across the turbulent water without a take. I have been surprised that i havent even had any pike, perch or trout whilst spinning for Salmon and i am finding the Mersey a desperately hard water as unlike the Ribble i havent yet seen any Salmon in the river which at least give you some encouragement. I need some encouragement as i am now over the 30hour mark without even a take.
As you can see from the photo i took, the water levels have dropped back to normal after the floods of a fortnight ago, however there is now a huge tree balanced across the top of the weir.
Talking about weirs, i was exploring a couple of new swims on the Irwell yesterday afternoon, and had the unexpected pleasure of watching some big trout attempting to jump one of the bigger weirs on their way upstream to spawn.
manchester fishing Irwell Ribble Trout