Instead of driving into town, or to my office I often walk or ride my bike alongside the River Irwell which is a much more pleasant vista than the A56 corridor. It is rare though to see any sort of fishy activity – as the trout never seem to actively feed at the surface on the lower river. So when I noticed fish rising in the same spot twice in the space of a fortnight it really gave me an itch to get out trouting.

In the past I’ve had a couple of absolute lunkers from this area whilst lure fishing for pike, but have yet to take a trout from this section of river on the fly – for some reason I cant reconcile fishing a big urban river with the delicate fly fishing presentation needed to tempt the trout – I much prefer fly fiishing small streams and pocket water so on the Lower Irwell I tend to use small lures or wait until the coarse season starts and catch them on maggots.

So this evening after work, I ventured down to the river with my lure kit in hand to the spot where I’d seen the rising fish. I had a take from a good sized trout after only 15 minutes or so but it threw the crushed barbs on the copper bladed mepps I had tied on. Undeterred i carried on moving down stream losing a couple of spinners on the river bed iron mongery but still seeing the occasional fish rise which kept my confidence up.

Moments after missing that fish, I was joined by Irwell dry fly master Nick – who immediately spotted rising fish and started a stealthy move upstream to cast to them. His arrival was fortunate, as it wasn’t much later that I had a second take and a lovely little brownie took a shine to my mepps.
Both of us were overjoyed to see trout in this part of the river, its only 100 yards from my office and less than 5 minutes away from Nicks front door.

Within 5 minutes of returning my little fish, I looked upstream to see Nicks rod bending into this cracking Brownie. 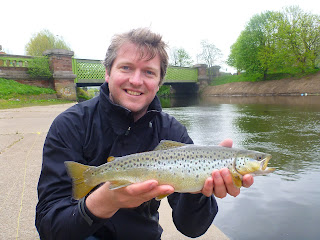 An Irwell brownie, nudging 2lbs, caught on upstream dry fly in the Bronx of Lower Broughton – Urban Trouting at its best.
I cant believe that trout have moved into this area of the river in numbers – only 100yards from the office – its going to be hard concentrating on work this summer 🙂