I had a couple of hours on the lower river this morning hoping for a repeat of last weeks good fortune. The snow melt which is currently running through the river is my excuse for not catching, but i had a thoroughly enjoyable morning trying out a variety of lures and watching a pair of pied wagtails on flitting about on the far bank.As well as the lures pictured below I also used an orange and yellow Big S which was claimed by the river. Many people consider lure fishing for pike to be a technique which is best suited to summer when water temperatures are higher and the fish more likely to chase, but over the last couple of years I’ve found that the pike on the Irwell will take them at any time of year – just not today! 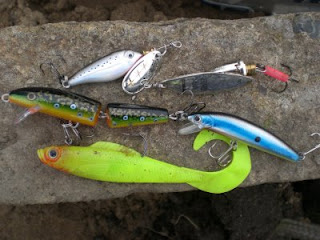 I had a free couple of hours earlier in the week and took the opportunity to find a few new access points to the Ship Canal in Trafford Park. I’ve found some promising pegs with easy access and am going to have a bash for a few hours after Matts rugby match tomorrow.

The Ship Canal has a bit of a magnetic effect on me. No one really knows whats in there, or how big the fish get, its one of the largest but least fished areas of water in the North West. I had an amazing session one morning last year when i took a tremendous bag of roach, but have struggled every other time I’ve fished here. If theres any piece of water in my local area which is going to throw up a real surprise then i reckon this is the place. Theres a month to go before the trout season re-opens so i will have a go at unlocking some of this waters secrets. There are rumours of big carp, tench, pike and some massive shoals of roach and bream. Maybe pre-baiting Ireland style with corn and crumb might be an effective tactic. Hopefully water temperatures will increase making fishing easire as the coarse season draws to a close.