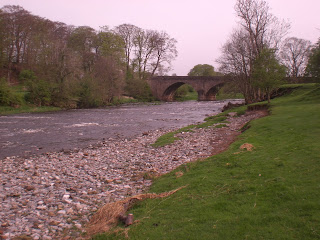 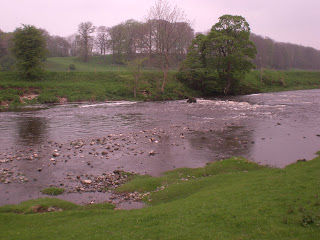 After spending weeks concentrating on the local river, we decided to have a change of scenery and make a visit to one of Tonys favourite beats on the Ribble. Adam, an accomplished fisherman from Hungary joined us today, so there were three eager anglers tackling up on the riverbank.
Adam must have been eager as i have never seen anyone tackle up and start fishing as quickly before in my life – he must have been tying flies onto his leader in the back of the car!
Whilst Adam was making his swift start, Tony and i decided to have a look at the bug life on the river bed, and by turning over a few stones, we soon found that there were plenty of baetis nymphs and caddis larvae about. As caddis patterns have worked so well recently on my local river, using them again today, together with a weighted shrimp as a dropper was a familiar set.
I am slowly beginning to realise that despite tackle shops, and magazines being full of gaudy coloured flies, on rivers with wild fish in them, drab grey, brown and brown/green patterns seem to give the best results. As my box of flies consists mainly of flies that i have purchased in packs from tackle shops, its about time i learn to tie some of my own that are more suited to the job.
Despite struggling with wading in a deeper, stronger flow i still managed to catch a nice small brown trout, and bumped half a dozen others. Tony had some decent sized browns and a couple of nice grayling. Adam also took a couple of nice browns.
All in all it was a great experience for me exploring some new water, and trying to catch fish on water that has far more angling pressure than the riverthat i have become accustomed to.
It was a very enjoyable day and hopefully on my next visit i will catch a grayling, as its so long since i caught one myself that i cant remember when it was.
As ever heres a photo of Tony with a good fish on, unfortunately though, this one got away. 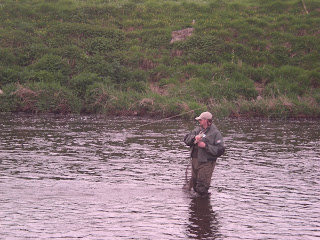 Heres the tiddler i caught – hopefully i might catch it again in two or three years time when it will put a bend in my rod. 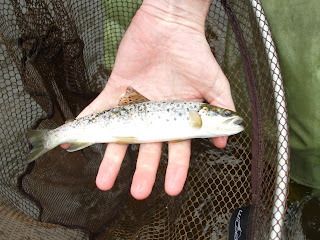