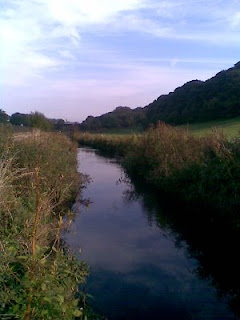 Due to work issues i have been unable to get out fishing for the last week, and this weekend Matthews Rugby commitments took priority so fishing had to be put on a back burner until 3.30 on Sunday afternoon.
As i only had time for a short session i passed up on my current salmon quest and met Tony on one of his local streams for the last few hours of daylight.
I cant call it a river because there were many spots where i could have jumped from one bank to the other without getting my feet wet. But despite its size, its stuffed with fish and choosing a nice deepish (2ft) glide i caught a nice roach first cast. Another one followed quickly, and then the swim died, so i moved to another likely looking spot a little further downstream.
My rig at this time consisted of 13ft trotting rod, centre pin with a 5bb stickfloat and a 2lb hooklength to a size 16 hook.
When Tony arrived he laughed at my set up, telling me that my set up was far too heavy, and in short time showed me just how many fish were in my original swim using a 0.5g pole float and a size 20 hook. He caught a fantastic brownie, well over a pound, and fantastically marked ( look at http://www.timebytheriver.blogspot.com/ as he is hopefully going to post at picture of it). In addition to the trout, Tony had some really nice roach. Ever the gent, Tony invited me back to fish my original swim, where i proceeded to catch about a dozen roach to about 120z’s. Amazing fishing from such a small stream.
We fished on until we could no longer see our floats, if we had a torch i think we would have stayed even longer! Was great to be fishing again.
manchester fishing Irwell Ribble Trout