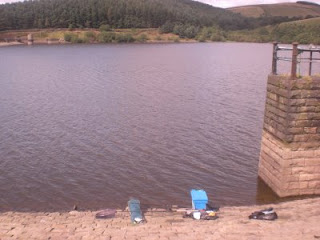 When i was a teenager my father used to take me fishing to the water authority reservoirs of the Piethorn Valley, which are situated on the moors above Oldham. I caught my first fish aged 7 (a brown trout) in one of the upper reservoirs and have spent many happy hours both coarse and game fishing in this area.
As the weather has been so wet recently, and the rivers close to bursting their banks, i decided to try these lakes again, where i havent been fishing for over 20 years.
The sun was making a rare appearance as i was setting up, and the fishing was as bright as the weather. Using standard tip and feeder tactics after baiting up an area about 25 yds out where the water was about 30ft deep i caught a roach a chuck for about 2 hours using red maggot as hookbait.
All the roach activity resulted in drawing pike into my swim, and fish snatched off my hook as i was landing them, and also pike taking fish as i was releasing them. At one point, i could see a pike of about 15 – 20lbs sitting in my swim waiting for me to put back a disorientated roach so it could have an easy lunch. ( i then started to release the fish i caught 10yds further down the bank).
I didnt have any pike gear with me otherwise i would have had a few of them out. However as i was sitting regretting leaving my pike tackle at home, the dad called me, moaning that all the horse racing had been cancelled for the day, when he found out where i was and what i was catching, it only took a moment to decide to come and join me and bring some pike tackle with him.
When he arrived, ,my dad was interested in the tactics i was using on the tip, right on cue i hooked into a larger fish, and 5 minutes later this slab hit the bottom of my landing net. When the bream move in, you normally catch a few but today i was unlucky and this was the only decent one which i caught. 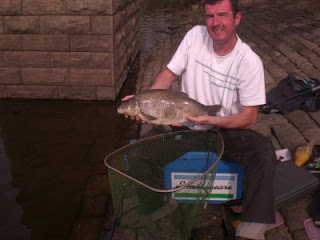 Dad tackled up some plugging gear, and fished the dam wall in close proximity to where i was fishing, and where the pike that had been plaguing me had been coming from. Despite using a variety of plugs and spinners he couldnt get a take. Meanwhile, the pike were still launching themselves at the roach i was catching, so i set one up under a bung for dad and told him to cast about 15 ft out in front of me.
It didnt take long for him to hook into this small jack which gave him a pretty good scrap for its size. However the sunshine had now gone, replaced by dark clouds blowing in over the moors, and dad quite rightly made a run for the cover of his car whilst i did the same shortly afterwards. 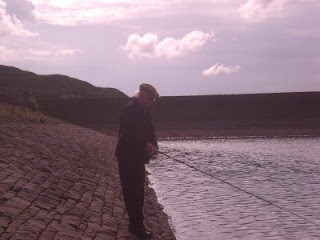 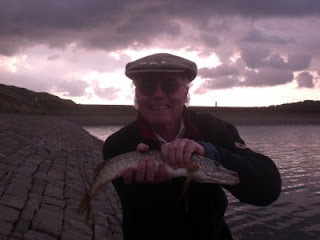 I think Matt will enjoy fishing here next weekend, i reckon we can get him a good double figure Pike if i can get the roach going again. It been his aim to catch one for a few years now, hes got close a few times but hopefully he will fulfil his ambition between now and the new year if he spends a bit of time on the bank with me.
manchester fishing Irwell Ribble Trout