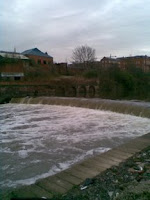 Today was the last day of the season for fishing the river Irwell. I sat twitching at my desk till about 2pm, then packed things in for the day, went home to change and pick up a rod and was making my first cast by 3. The river was pretty high and chocolate coloured after recent rains but what the heck its the last day of the season so has to worth a try.
I decided to have a couple of hours spinning at one of the local weirs for an end of season Pike.
I tried out various lures but had no takes. However i had a good chat with ginger Dan who turned up about half three and fished for an hour or so with me. He didnt have any takes either.
So as the coarse season finishes today the trout season starts tomorrow. I wont be fishing this weekend as i have promised my gf a weekend away. However i have told her that there is a very scenic walk around a particular lake in Snowdonia – not to hilly and a good path. What she doesnt realise is that this lake happens to contain a sizeable head of arctic char! Pity the season in wales doesnt start until the 20th March otheriwise i would have sneaked a rod into the boot of the car.
manchester fishing Irwell Ribble Trout