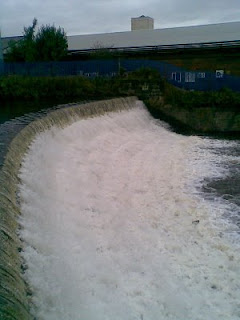 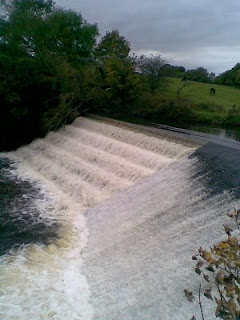 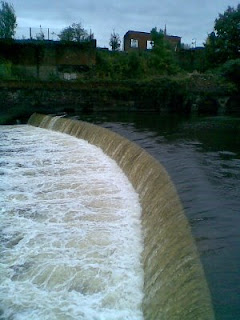 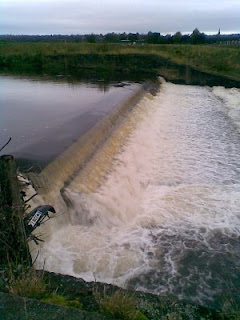 I went for a walk this afternoon to have a look at a couple of the weirpools on my local river. After seeing trout attempting to jump the weir in the top most picture on Friday, i thought it might be interesting to see if they were attempting to get up any of the others.
My photos don’t really give you any idea of scale, but the weir in the topmost picture is about 16ft, then about 18ft in the second picture, 6ft in the third picture and about 10ft in the last. We saw fish jumping in the first two weirs pictured, but no fish in the other two. There has been conjecture that there are now migratory fish in the river, but i cant see how as the lock gates, sluices and hydro electrical turbines on the lock gates of the Manchester Ship Canal at Irlam make it virtually impossible for fish to migrate upstream from that point. The only way fish can get upstream is if they are actually in a lock when a ship is passing upstream through the ship canal at Irlam so whilst not impossible it is improbable.
The fish i saw today were all brownies, which must have some sort of genetic desire to migrate upstream to spawn. Hopefully there will be more periods of heavy rainfall in the near future which will make these seemingly impossible obsticles passable allowing the fish to find suitable spawning sites.
An amazing sight.
manchester fishing Irwell Ribble Trout