My fishing sessions seem to be coming in short sharp bursts at the moment – a stolen hour or sneaky afternoon out of the office. Today was my mate Petes birthday – and he wanted a bit of company – how could I not oblige…….. and to create a bit of extra birthday fun,,,,, I invited mutual friend and professional predator fisherman Ant Glascoe Jnr to join the birthday party.

Being the selfish so and so that I am, I inveigled the chaps into helping me knock a couple of species off my list for 2017.

Manchester has its own North South divide – Grayling are found in South Manchester rivers but not in the Northern ones.

So in order to strike Grayling off my species hunt – I headed south to the River Goyt.

I’ve never fished the Goyt before, so before tackling up – I had a good walk along the river bank at Woodbank Park in Stockport to search out any potential good swims….

It was great – a great section of river with plenty of variety – weir pools, shallow fast runs, deep fast runs, and slow glides.

So I tackled up the trusty old 15ft Drennan and Okuma Sheffield pin – a medium lignum stick and size 20 hook… Grayling love a maggot so……….

So do out of season brown trout – my first fish of the day was returned to the river without any fuss.

Working my way downstream swim by swim I began to feel as though I was struggling – water which I was convinced should hold fish appeared to be devoid of fish.

The gang of three reunited on a pool offering a great variety of swims – and none of us managed to raise a fish – until I started lifting rocks and scooping mini species (I am on a species hunt – in case I hadn’t mentioned it at least a dozen times before)….. a Bullhead and Stone Loach obliged within 5 minutes of each other.

Working our way downstream we finally started picking up Grayling in deep slack water above a weir.

Great to see the River Goyt fishing so well – another urban Manchester river which has recovered from its polluted industrial past. 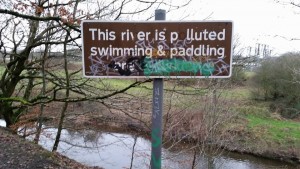 Have been given an all day pass this Sunday —- so many choices………….. lets see where I end up