Due to work pressures, my time on the bank has been limited recently, and as I cant see any let up in the short term my fishing time is very precious.
Last week saw me out fishing only once, to take my young nephew Ed out for his 7th birthday for an hour at Drinkwater Park.
Its years since I last fished here, but was pleased to help young Ed catch 20+fish in an hour and a half. 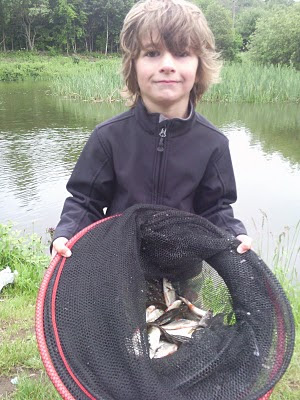 June the 16th saw me out on the Ribble with Phil and Tony. Again work commitments resulted in me having to have an early finish. I caught countless brown trout to about 12 inches in length and a couple of dace to about 6oz. I did hook into a couple of bigger fish early on in the day, but suffered hook pulls on each occasion. It was only when i stepped up from a size 14 from a 16 that the fish began to stick. 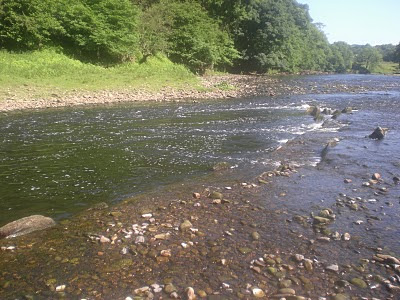 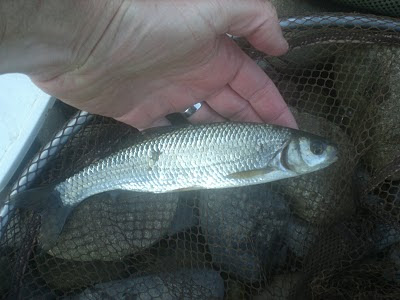 It was rather a disappointing opening day for me, however Phil and Tony both found the fish later on in the afternoon with them taking Barbel to 8lbs and Chub to 5lb 10oz – jealous? You bet i am.

Lastly I would like to congratulate Tony on catching his Salmon. I doubt anyone else will catch a Salmon using this technique again this year. The story as related to me goes:-
“We were fishing stick and pin for the last few hours before darkness, we had been chatting to the balif of another beat who was Salmon fishing, and he told us that a recent high tide had brought a few pods of Salmon and Sea Trout into the river. We found a nice run, and were stick floating maggot, catching a few small chub, when Pete hooked into a decent fish which didnt move but just pulsed in the flow. Pete decided to give the fish a little extra pressure, and then the fish suddenly realised it was hooked, leapt clear of the water, shook its head and shed the hook virtually immediately. A very big Salmon according to Tony.
Now as the light was nearly gone, we were packing up to go home, but Salmon were splashing in the shallow gravel run, battling to make their way upstream under the cover of darkness. So i decided to have a bit of a laugh and wind Pete up – I jumped into the river and ran across the shallows wildly waving my landing net about, “shouting come here salmon – this is how you catch em Pete” and then all of a sudden i must have nearly trodden on one, and up it jumps into my landing net”
Here is the fish and a very lucky angler. 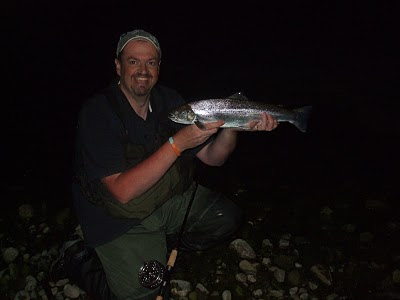 It does make me chuckle thinking about this, as Tony must have looked a real sight charging about in the river. Some people spend thousands a year in the pursuit of Salmon, and then Tony goes and has a kamikazi fish jump into his outstretched landing net.
Brilliant – i would loved to have been there.

The big problem now is that I am really lagging behind on the seasons List. I have a grand total of 12 species, whereas Phil is on 15 and Tony now on a runaway 17. Looks like I’ve got some fishing/catching up to do.

Hopefully i will be back on the Ribble in Phils swim on Saturday evening – knowing my luck probably catching tiddlers again.
manchester fishing Irwell Ribble Trout