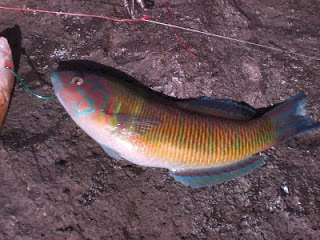 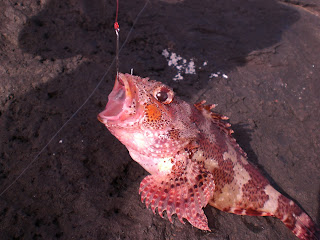 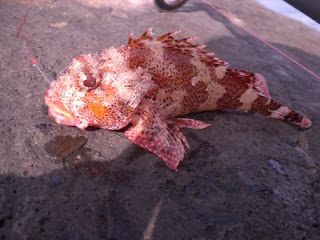 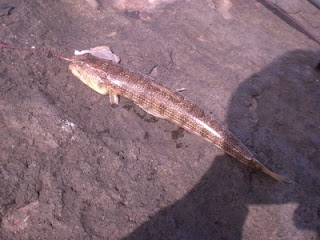 Despite the title of this post being “fishing in tenerife” i only managed to get out for one short session during the week i spent in Playa de Las Americas. The sun was hot, the beer was cold, the snorkelling fantastic and fishing was soon forgotten about.
I did manage just the one early morning session on the second morning of the holiday, and used my 12 foot telescopic beach caster, together with 15lb line to catch the “monsters “of the deep shown in the photos above. I used a double paternoster and 2oz lead arrangement with prawn from the local supermarket as hookbait. Within 30 seconds of the baits settling the rod tip started twitching like mad, then lay still as the soft prawn bait had been stripped from the hooks by the thousands of small brightly coloured fish that inhabit these waters. I only fished for an hour or so before i ran out of bait and then went back to the apartment for an early breakfast.
Later during the week i bought some squid, thinking it would be a tougher hookbait and last longer on the hook, but the squid never left the fridge as i was having more fun snorkelling than fishing.
The waterpark, jungle park, monkey park, the beach etc. were far more appealing to Lucia and Matthew so for a change i put the fishing gear away and went with the flow.
manchester fishing Irwell Ribble Trout