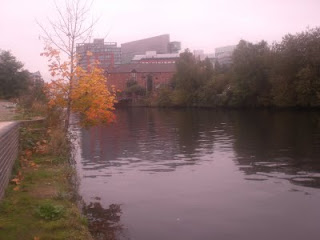 I spent the last few hours of daylight fishing the River Irwell behind Granada Studios on the old match length.
There used to be a weekly open match held on this length of river for quite a few years, until the owners of the Hotel opposite became fed up with anglers peeing in the bushes in full view of the guests eating in their riverside restaurant. The hotel then bought out the angling rights from Salford Council and prevented anglers from using the river.
The signs showing private ownership still exist, even though Granada Angling Club havent paid any rent for the fishing rights for over 5 years now.
This should encourage you to go down and fish there, as it used to be a fantastic piece of water, with match weights of silver fish to over 40lbs.
Since those halcyon days, cormorants have devastated fish stocks in the lower river, and all I could manage in 4 hours on Sunday afternoon was about half a dozen small dace. I started by using a maggot feeder, but the bites were nothing more than tremors on the tip. It was only by swapping to a stickfloat fished about 6 inches overdepth that i could pick up a couple of fish.
Again, I was kept company by herons and kingfishers – amazing that wildlife like this can survive in Manchester City Centre. What a pity that cormorants have ruined the fish stocks.
manchester fishing Irwell Ribble Trout