I woke this morning with a headache and a really big dose of the blues. I considered going to work for a minute or two, then rolled over, determined not to surface till 11am.
After getting up and downing a variety of different pain relievers (which had no effect) I was still grumpy. The sun was shining for a change but did little to alleviate the dark clouds hanging over my head.

After lunch i began to feel as though i was wasting a day of my life, so i decided to have a trip out alone on the river where no one would get on my nerves and i could mutter and swear to my hearts content.

I have concentrated on coarse angling this summer, neglecting the trout which inhabit the upper reaches of my local river as i had a few disappointing sessions at the start of the season. It seemed as though someone had fished the river through during the close season/winter taking the fish for the pot.
Last year it wasnt uncommon to catch up to 20 fish in a session ranging from 6oz to 2lbs. Earlier this year we counted ourselves lucky if we caught 2 or 3 fish in a session, with the biggest pushing 12oz.

As the trout season is closing at the end of September I decided to see if the situation had improved over the summer. Trout are really mobile constantly searching out the best spots to intercept the most food with the minimum of effort. 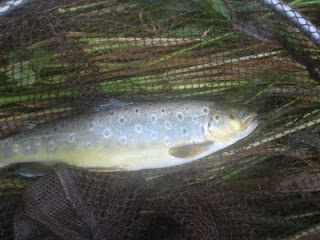 This was quickly released and i then proceeded to catch a further 3 fish from the pool up to a pound in weight. Not a bad start and my personal gloom began to lift. 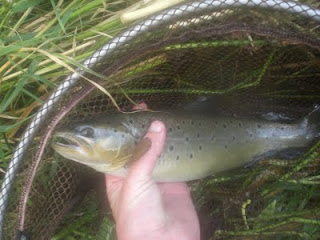 After fishing the pool through i made my way down to the bottom of the beat and crossed the river in the shallows, moving up alongside the old mill, i could only raise a single small fish from what last year was one of the best runs on the river.

Making my way up to the viaduct swim i took a couple of fish from up and downstream of the big boulder and lost a few fish which spun off my barbless hook in the fast current.
From the viaduct i waded upstream to the waterfall, taking lots of small trout in the boiling pocket water. I was getting lots of takes from small fish and bumping the majority off in the fast current. 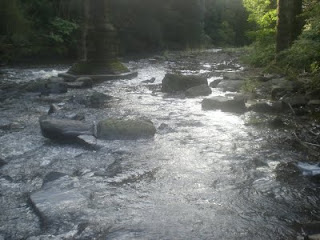 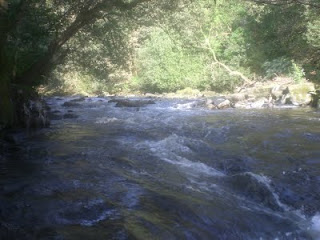 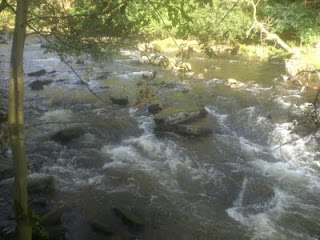 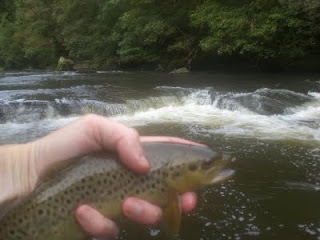 After getting a nice 12oz fish in the waterfall pool I walked upstream to the mill race pool. Again this swim used to be a banker for half a dozen fish last season, but today i couldnt get any takes, nor could i see any fish rising.
Crossing the river again, I moved upstream and fished the green pipe swim – surprisingly drawing a blank again. I did manage to hook into another fish in the small fast run above the pipe swim, but again it spun off in the strong current.
It was great to be out in such lovely surroundings, and with the sun shining and my rod bending regularly it lifted my bad mood and nourished the soul. 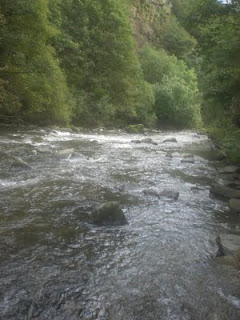 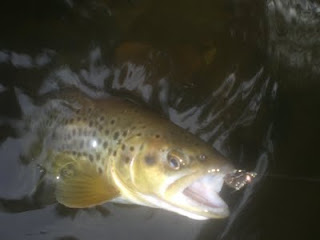 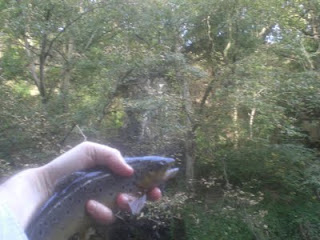 I’m really pleased to have had such a good afternoon, i think i had about a dozen fish, bumping off a similar number.
All the regular runs from last season appear to be virtually devoid of fish, with nearly all of my catch coming from fast, boiling pocket water which i guess most people walk past without fishing. Maybe there are still people taking fish for the pot from the more popular runs – which is a real shame, and is probably the reason for my not taking a fish over a pound. I wish people wouldn’t as they taste like sh*te from the Irwell and are probably only just able to swim they are so saturated with heavy metals etc.
Anyway – hopefully the fish i caught today will survive the winter, and the fishmongers and all be nice 2 pounders by the end of next year.
manchester fishing Irwell Ribble Trout