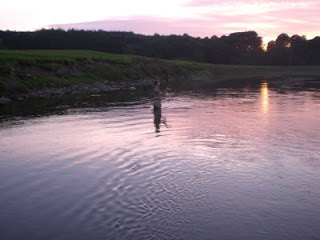 Saturday brought about a trip to fish a beat on the mid – Ribble. It was a trip which had been organised a few weeks beforehand by Phil K and one which i had been eagerly looking forwards to for some time. We had arranged to meet North Country Angler and two other forum members Ian and Matt, with Tony also joining us as well i felt as though i was fishing in quite high circles and hoped that i wouldnt blank in front of such auguste company as i nearly did on my last visit to this beat.
I arrived at 10am and had the pleasure of meeting Matt (Mr North Country Angler) for the first time. It was the enjoyment i had reading his blog, and Nicks Angling For Something blog which inspired me to start my blog earlier this year. So if you cant stand my blog blame them for getting me started. Actually if you dont my blog, why are your reading it? Close your browser immediately!!!
I took my time tackling up, and was glad i did so, as i had the pleasure of watching Matt explore the upper pools of the beat with his short line and heavy bugs. It was great to watch him work his way through the pockets of fast water and i wasnt surprised to see him soon into the fish. I think he took a couple of small browns and a nice grayling.
I stettled in fishing a riffle between Matt and Phil, looking to see if i could tempt anything from the faster deeper water. I had a couple of bugs on and fishing slightly upstream and across i didnt get any takes. I’ve never taken any fish from these upper pools on my previous two visits, with all of my fish coming from two pools in the middle of the beat. I think this lack of success in these upper pools is due to the higher angling pressure on these pools (they are nearer the car park) and my inexperince of river fly fishing. These fish must have seen dozens of varieties of every type of fly anglers tie so my poorly presented offerings were treated with the disdain they deserve.
After a quick hello and chat to Ian (aka Crusty) and Matt (aka Bricktop) who are regular posters on a couple of the forums i read and also friends of Phil and Tonys i decided to seek out pastures new, and took a hike down to the bottom pool on the beat where i have never previously fished.
I enjoyed my walk downstream, the river was in fantastic condition, the water clear and at normal summer levels. There were mushrooms dotting the fields and the hawthorn trees were heavy with their bright red berries. Walking down past Hodder Foot where the a couple of Salmon anglers had taken residence, the lower end of the beat was deserted and the pools inviting. I made my way down to Calder Foot which is the lowest pool in the beat and started to fish in the waters where the two rivers met.
I stood in the centre of the River Calder and cast into the pool where its waters met those of the Ribble. It was after only 15 minutes that i received the fright of my life as a Salmon cleared the water only 20 feet in front of me, and crashed back into the river with a splash which sounded like someone throwing a large boulder into midstream. Superb!!!
I tried quite a few combination of flies without getting any interest from any trout until i put a tiny black ptn on point and a fly pictured below as dropper. 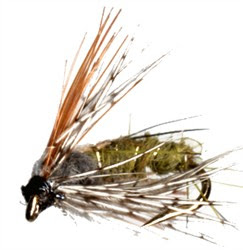 I moved out of my chosen waters meet swim, and upstreamed in the streamier main river water in one of the pools above. I proceeded to catch three brownies and a tiny Salmon Parr in the space of only 20 minutes. Two of the brownies were a decent size and definitely my two biggest trout to date from this beat. 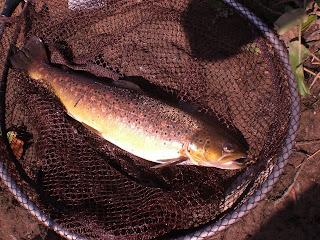 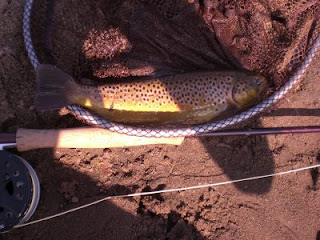 I had been joined by this time by a Salmon Angler on the opposite bank. There were plenty of Salmon showing in the main pool, and he tackled up with a big bunch of worms and started to work his way through the swim. It must have been really frustrating for him as there were Salmon showing all the way throughout the pool. I was thinking about tying on two Salmon flies i had found in the bank side vegetation at my usual Salmon spot in continuence of my salmon quest, but i had bought a trout only day ticket and didnt fancy pushing my luck. The other angler then swapped tackle and started to use prawns, had had a fish on first cast. Unluckily for him, the fish threw the hook after only a brief fight. However, he had a further 3 good pulls in his next 5 or six casts but couldnt connect with any of the biters. After running out of prawns, he inexplicably packed up and left. I couldnt believe it, as i was amazed by the number of Salmon splashing about, it must have been every Salmon anglers dream to have such a pool full of fish in front of them.
After catching these fish, i decided to stop being anti social and walked back upstream to find the others and have a chat. The guys were all still in the upper section of the beat, but by now i found that Matt (North Country Angler) had left, but that Tony had arrived. On hearing my news i could see a sparkle in Tonys eyes as he headed off downriver to the pool i’d just left. A couple of butties, a chat with Ian, and 10 fruitless minutes checking out a little riffle i decided to head off back downstream to join Tony.
By now, yet another Salmon angler was fishing the pool from the opposite bank, this guy had a little more luck and had already banked a 7lb salmon on the fly. There were still large fish rising in the pool so i decided to tie on the two largest trout flies in my box and see if i could arouse any interest. I fished for the last two hours with fish crashing all around me but without even a sniff of interest from any of the fish. Tony joined me and we spent the last hour standing next to each other casting into the gloom, but without any luck.
We reluctantly packed up and it was dark by the time we got back to the pub car park where we found Phil waiting patiently for us.
It was a very enjoyable day, everyone caught fish, despite this being a notoriously difficult beat, and the weather was superb. I enjoyed meeting Ian, and the two Matts, and look forwards to fishing with them again. We stayed on to have a pint together in the pub, and it was good to chat about our experiences of waters we all fish. Tight lines fellas.
manchester fishing Irwell Ribble Trout