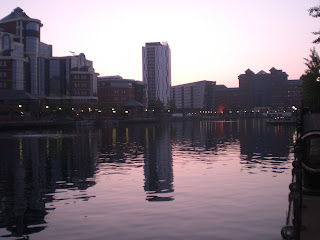 I had arranged to meet Miggy at 6am at Dock 9 Salford Quays, so despite all my best intentions i didnt get to bed until midnight the night before. Imagine how i felt to get a text message at 3am to inform me that he couldnt sleep and was going to set off at 4am!. I cursed and rolled over, beds are so soft and warm zzzzzzz, 4am another text – he had set off and was setting up and where was i ? 15 minutes later i parked up next to 9 dock and could see Miggy busy trying to catch livebaits. A small perch was greedy enough to seal its fate and was set up on the trace. Before the lead hit the bottom 30ft down the Pike in the photo below had made the perch its breakfast. It caught us unawares as i had to quickly unpack and assemble Miggys landing net in order to get it up the quayside. I hung around for 2 hours chatting with Miggy without setting up a rod, then decided to head over to the ship canal and test out my killer method for the shoals of roach that i have previously had trouble catching. 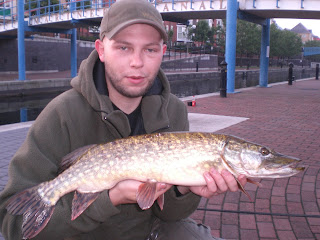 The last visit to the Ship Canal with Phil was hard work as it was blowing a gale, making bite detection all but impossible, we knew the fish were there, as our baits were regularly chewed up by the fish, but the wind made bite detection virtually impossible. This morning it was the exact opposite with a glassy calm making bait presentation and bite detection far simpler. 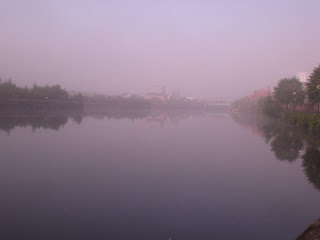 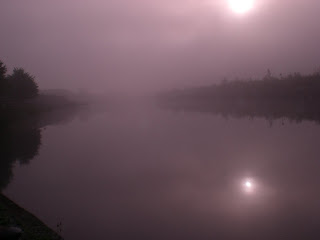 My killer method was to lay a bed of groundbait using an open end feeder at two rodlengths out in 14 ft of water. I then trotted through a 4 gram Cralusso Bolo float in the gentle flow.
Bites and fish came thick and fast, and i gave up counting after reaching 50 fish. The roach were in pristine condition ranging in size from 4 – 12oz. The chub were a smaller stamp from 2 – 8oz.
I caught steadily til about 10.30am when the bites slowed and then stopped. By this time the early morning mist had dissappeared and the bright sunshine must have put the fish off the feed.
I fished on until 12.30 but in the last hour the size of the fish got smaller until the bites dried up completely. Miggy came along at about 11am to tell me he had caught another Pike of about15lb ana a nice tench of about 5lbs.
I have no idea of the total bag weight i caught but guessing that the average weight of fish was 6oz then i must have had a net of at least 20lbs of roach and small chub. The best days silver fishing i have had in ages. It would have been interesting to see and photograph such a bag of fish but unfortunately its still the close season until the 16th June so keep nets are not allowed.

The Bolo float worked like dream holding its line two rod lengths out, there wasnt even a hint of it trying to return to the line behind the rod tip. Another bonus of using this type of float is that it doesnt ride up when being held back against the flow.
At 12.30 went home for a well deserved sleep.

In the evening i went fishing with my favourite fishing parter. He gets into lots of tangles and misshaps, but is the best company i could ask for.
Matt is slowly becoming a better angler and can now set up his rod, tie some of the knots, hook and land small fish but hasnt the experience to play and land larger specimens. We took a quick two hour trip to Maceys in Bury.

Matt caught this skimmer first cast, then had a few perch and a roach. 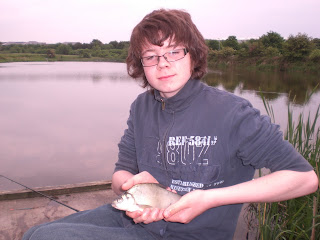 He then hooked into a fish that took off like a train across the lake – everything was going wrong for him, letting the rod tip fall and follow the line of the fish, letting the fish into the weeds, letting it swim under the fishing platform, despite all this just as i was about to slip the net under a lovely 5lb plus mirror carp the hooklength parted. Matthew i feel for you but you know its only a matter of time before you catch a cracker.