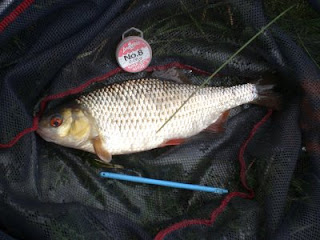 On Saturday Matthew and I spent the last few hours together on our local river using both trotted worm and later on some nymphs fished down and across to no effect. Last year we would have expected to catch a few fish, get lots of bites and see fish rising. This season, we have been seeing very few signs of fish. No fish rising in their usual haunts, only a few bites, and even fewer fish. Its all rather disappointing, and i think its now time to search out a few more beats on the river to check if its not a problem on the whole system, or just localised to my favourite swims.
Goosander, cormorants and mink could be the cause, or possibly a pollution incident going unnoticed during the winter months when nobody was out on the river.
After fishing Square Lodge a few times, I have been itching to try the larger lake “Deep Pit” which is found by walking along a muddy path through the trees behind Square Lodge. There was hardly a breath of air, and with no ripple on the lake it was a pleasure watching the fish taking insects off the surface – I bet i could have raised a few eyebrows by using my fly gear!
I settled in a swim which featured a tree overhanging the lake to my left and open water in front, with a shelf sloping away to 5ft deep at 7metres (Dont you love fisher talk – poles in metres, depths in feet, maggots in pints and our car engines in litres). As I was aiming to have a nice relaxing session, I was lazy and only fed one line, straight out in front of me at 7metres. Using a kinder pot i fed the swim with hemp, micro pellets and a few casters. Hemp and caster has been a long time favourite combination of mine as it usually attracts a better quality of fish than maggot and groundbait.
It wasnt long before my float rose slightly and then dipped and slid away – and i lifted into a lovely Crucian Carp of about 1.5lbs. After catching a few nice roach and crucians, i got a call from Tony asking what the fishing was like and what I thought about Deep Pit. I think my brief eulogy and the fact that i had a decent Crucian on whilst i was talking to him, persuaded him to come down and have a go himself. So about half an hour later Tony arrived with his tackle, and the fish promptly stopped feeding for about an hour – you can predict this sort of thing really when we go fishing. 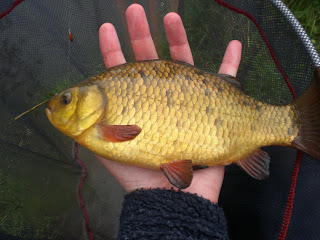 On reflection, i think it was the fact that i stopped feeding as regularly, that slowed the bites down, and later on in the evening as I stepped up the frequency of feeding, i started to get more bites again. 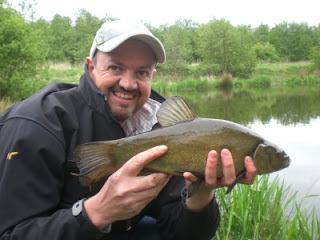 Hemp and caster really works as a bait combination, as i wasnt bothered by small fish all evening. Tony had a lovely tench of about 2.5lbs which fought like a fish 3 times its weight on light pole tackle and I had some cracking roach to well over a pound and I lost count of the Crucians I landed.
Deep Pit is an old pit head which has been capped and the land reclaimed – with such pleasant surroundings, wildlife, and the volume of the birdsong we would be hard pressed to have guessed its industrial past.
If you fancy giving it a try you if you look for Hindley railway station on Google Maps you should be able to see Square Lodge and Deep Pit just to the North West of the station, and tickets are £2 on the bank.
manchester fishing Irwell Ribble Trout