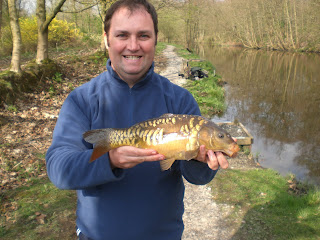 I spent the best part of the day at Clevely Bridge Fishery near Lancaster. It holds a good head of small carp, so I arrived with a bag of Betaine Green groundbait, sweetcorn and some soft hooker pellets in the hope of a nice net of fish

I fed two swims (10 and 2 O’clock) and used my 6metre margin pole fitted with size14 elastic through the top two sections.
As the water temperature is still relatively low up here in the NorthWest, I thought my best option would be to fish on or an inch or two above the bottom.
5 small carp in my first 10 “put ins” had me thinking that i had hit upon a cracker of a swim, so I fed a two more eggs of groundbait. There were fish rooting around on the lake bed causing my swim to fizz. However despite lots of activity in front of me I found it very difficult to tempt any more fish. I used every both strawberry and green hooker pellets, sweetcorn and maggots but I couldn’t really get the fish coming on a regular basis.
Phil who was 2 pegs further up the lake, was using a waggler float and was spraying maggots over towards the far bank. By using these tactics he was catching at least 2 fish to my one, and as you can see from his net at the end of the day, he had a good 20-30lb of fish.
I probably just about scraped 10lbs – which annoyed me as I probably ruined a good swim by using too much groundbait. When i was a teenager my favoured method of fishing was to use hemp and caster – I think that by using those tactics i would have at least doubled the weight of fish I caught today. Betaine groundbait definitely works as an attractor – I think I just over did things today, I’ve killed a good swim before using too much of this stuff so i hope i have now learnt my lesson. 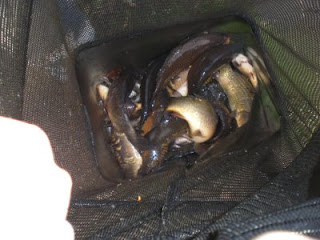 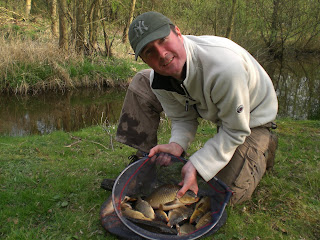