I decided to take advantage of the long evenings by having a few hours on the Irwell this evening. I fished the swims shown in the photo below, for the first time ever and was pleasantly surprised to catch nearly a fish a chuck for the entire evening. 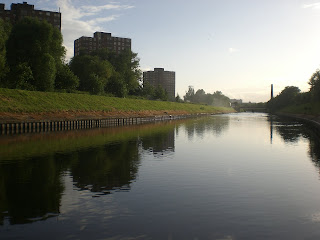 The majority of the fish were small chub averaging about 12oz but was lucky enough to catch the occasional lunker such as this one to keep me on my toes. 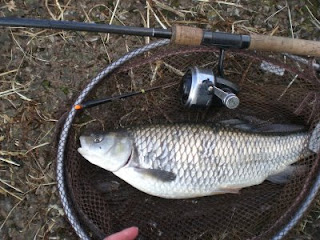 Prior to the season opening, this section of the river has been solid with roach and bream as this is the area to which they migrate from the Ship Canal to spawn. Some of the shoals of fish i saw a few weeks ago in this area comprised of literally thousands of fish – which can only be good for the system as a whole. (makes me wonder how i managed to blank so often, in known fish holding areas last winter!)
I started off using a size 14 Kamasan B920 under a lignum stick float but found that the bites became far more positive when i changed to a size 16 red maggot carp hook. Yet again i noticed that the fish take the hookbait more confidently when the hook is buried deep inside the maggot rather than nicked through one end or the other.
I didnt wade in the river this evening as after yesterdays downpour the water was very coloured and it was difficult to see where i was putting my feet.
As usual i didnt see anyone else fishing in this area, though I’m sure I’ll have company on my next visit to the river as i intend to fish the tail end of the weirpool. I saw a monster chub there on one of my recent lunchtime walks and am sure that a big lump of breadflake on the hook will improve the average size of fish I catch.
manchester fishing Irwell Ribble Trout