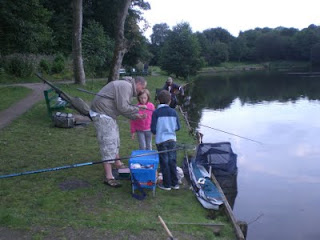 After last weeks visit to the lake when i was lucky enough to get one bite in 5 hours, I opted for a change of tactics.
Ditching the heavy feeder rod and pellets, I instead used my 6metre margin pole fitted with 14s elastic.
I plumbed up at about 5ft and to begin with fed the swim with 3 tangerine sized balls of fishmeal groundbait which also contained a handfull of micro pellets. Hookbait was good old bread flake on a size 14 Kamasan611 extra strong.
There was a good chop on the water so i wasnt too worried about the profile of the pole scaring the fish.
I caught these three lovely tincas – the largest 5lb 5oz. I lost a couple too, one of which straightened the kamasan extra strong hook!!
As the evening drew in and the wind dropped the bites dried up and my swim filled with small roach and perch which pecked away at the bread flake, so i swapped over to bread paste.
Tony dropped by for the last half hour, and his young lad Logan was keen to get in the hot seat and have a go with my pole.
Single maggot on a size 14 saw him catching a steady succession of little roach and perch. The tench having been spooked by the pole.
If the rain holds off then hopefully I will be able to get a few hours on the Ribble this weekend – otherwise I will have a last go for the tench with Phil. No matter whether its this weekend or the next I am going to use tares over hemp and micro pellets the next time i visit this lake, as i am sure that there will be some cracking roach in here too. 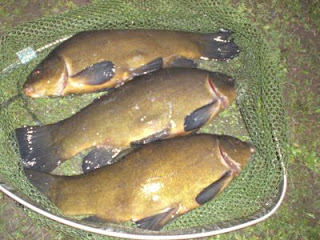 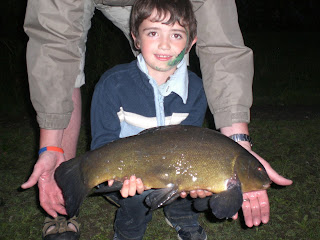 I usually name the venues i fish but would rather not in this instance for obvious reasons this being a public blog.
However if you send me an email i will be happy give you the details.
manchester fishing Irwell Ribble Trout