I had a few hours free this afternoon, so I defrosted  a few dead baits and headed off towards the Irwell at Agecroft. The river was still running high and fast so I decided to have a few casts on “The Pit”.

“The Pit” is one of Greater Manchesters few gravel pits, dug in the late 1960s to provide gravel for the building of the local motorway network. Its not too far from home, but saying that its not an easy water is the understatement of the year. Its home to some massive carp, tench, bream and pike but their numbers as you would expect are very low. People have been known to fish the place for a season only to be rewarded with one or two bites – however the quality of the fish make these bites worth the wait. 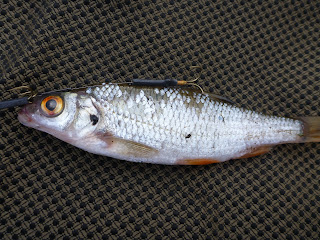 So i mounted a roach and cast around for an hour or so without a touch. I like wobbling dead roach, I think its far more effective method lures as Paul and I have proved to each other over the last 12 months. Ah well today it wasnt to be, the wind chill and frequent horizontal rain showers eventually saw me off. 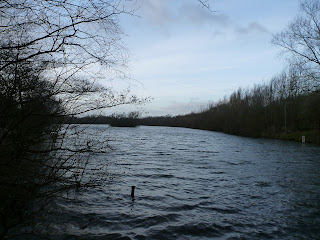 The windward end of “the pit” – possibly a heart breaking hole in the ground – or if I’m lucky it might give up  a couple of its gems.