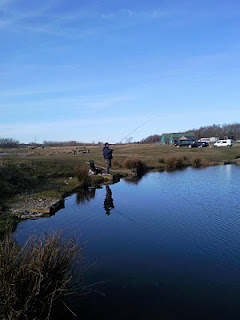 I couldn’t miss making the most of a rare sunny day, so all work was put on hold, and Phil and I drove up the M6 to Borwick.

The less forgiving would call Borwick an over exposed hole in the ground, I prefer to think it reflects the gritty, rocky northern hillside this fishery is located upon. It is however stuffed with fish, and after the long big freeze the fish might be hungry.

Phil set up using a huge bodied waggler taking about 5 or 6 SSG shot, with single red maggot as hookbait which he launched towards the centre of the lake – hoping to pick up fish cruising in mid-water.

I decided to set up using a cage feeder filled with liquidised bread and sweetcorn on a hair rig as hookbait.

After about 30mins, and a few small knocks my tip wrapped round and i felt a really solid fish on the end which took alot of line. Unfortunately it shed the hook just as Phil was readying the net to help me land it.

I joked to Phil that it was probably going to be my only fish of the day – and I sat gutted as Phil proceeded to catch 6 nice carp during the next couple of hours.

It was only when i switched over to using a method feeder with Swim Stim Green Groundbait, that i finally caught a few nice skimmer bream, then just before we started to pack up, my tip wrapped right round again and i played and this time landed a nice small carp of about 4lbs.

The sunshine, the buzzards, the oystercatchers, curlews and lapwings made it a lovely day out in the sun.
Roll on spring.

You might have noticed that in the right hand column of my blog I’ve decided to list the species i fish i catch this season and the largest fish of each species. Every year I compile a personal list – my best year was 24 different species, last year i managed 20 without trtying. It looks like Phil wants to make a little competition about who can catch the most this year…… bring it on Phil 🙂
Phil – anything less than 20 will be classed as pathetic and only three types of carp count towards the total common, grass and crucian carp.
A tench is a tench – golden tench don’t count as an extra species, neither do blue trout or golden rudd etc.

And if you can get a lamprey i will buy you a pint..