Due to upheavals on the work front I’ve been unable to spend time updating my blog. Time on the bank has been restricted to only one Sunday afternoon out fishing the www.maggotdrowning.com annual Christmas Fur & Feather match at Pool Bridge Farm near York.

As I only ever fish this one match per year, its an event I look forwards to, and suddenly develop a competitive streak – meaning I would kill grannies and small children in order to finish ahead of Phil-K.

The weather was atrocious, and so was my drawing hand as I pulled out the peg furthest away from the car!

Safe in the knowledge that I have no chance of winning the event (there are some really top draw anglers who take part every year) I decided to go for small fish in large numbers and hope for a bonus fish or two to bump me up the leader board. Really I will settle for anything to avoid the embarrassment of a dry net.

Phil – who was only 3 pegs away took the opposite approach and set his stall out for the lumps.

And at the start it looked as though he had made the right choice, as his maggot feeder approach saw him catch a nice carp first cast, and then a tench on his third cast.

I stuck to my original plan, and was soon catching small roach and perch nearly every put in using a 6m whip and flouro pinkies on the drop.

I did also feed a pellet line, in the hope that i would pick up the occasional bonus fish – but they never materialised.

The fish kept coming all match, and i caught over 60 tiddlers – for a total weight of 5lb 4oz.
Phil had a couple more fish, but luckily for me nothing big. I pipped him by 8oz 🙂 🙂 🙂
But to give him his due, he didn’t bring his brolly, and to escape from the incessant rain, hid in my car for an hour. I reckon if he’d have stuck it out he would have beaten me.
Due to the number of anglers taking part, the match was fished over two lakes. The winner (one of the locals) was on our lake and won with 11b+, then my net was the second largest on our lake, but other good weights from the other lake meant that i fished 7th overall, and Phil 8th. I was really pleased with 7th as I stuck to my game plan, and if a bonus fish or two would have shown up then i might have made the top 3.
These maggotdrowners events are more about meeting friends and having fun, rather than serious fishing – and it was good to meet some people for the first time, and catch up again with others.
In true Fur & Feather tradition, the winners were presented with Pheasants & Rabbits at the prize giving in the cafe at the end of the match. 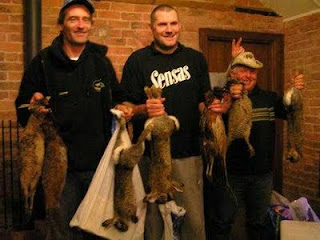 Many thanks to David Senior for organising a great day out.

So other than this trip out to York, I’ve not been able to get out fishing recently. As you all know, the weather has been atrocious, the rivers high, and even “keen” anglers like myself have been disinclined to venture out.

Until this afternoon, when the sun shone through my office window and i thought stuff it – I’ve bait left over from the match in the fridge and it needs using up.

So a quick change of clothes, throw some tackle in the back of the car, and I was tackling up by the brook 15 minutes later.
The weather was perfect, the brook though higher than normal and carrying more than a tinge of colour looked fantastic. The recent heavy rain and floods have swept the banks clean of it summer growth, making the over-grown far bank far more accessible to float fishing than during the summer months.

This brook, despite its diminutive size, holds some cracking fish but I started off by catching their smaller cousins. I worked my way downstream having a few casts in each likely looking swim and took a couple of out of season brownies, small roach and perch whilst enjoying the weak winter sunshine. 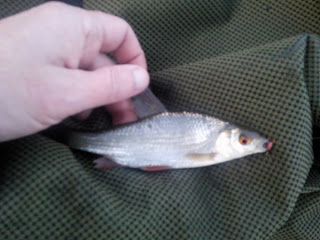 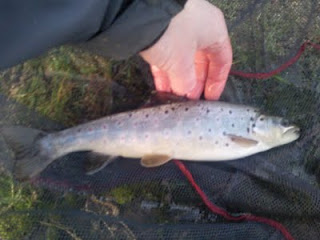 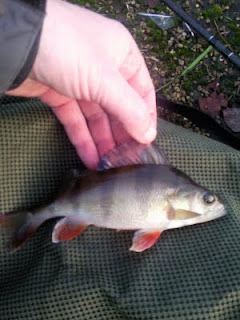 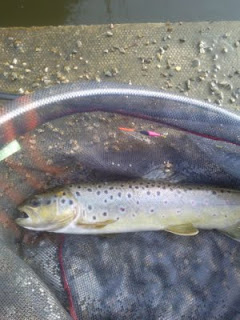 I did hook into a larger brownie, after it realised it was hooked, went airborne a few times, then ran into a hole in the near bank under my feet and shed the hook. It was a good two pounds.

As the light fell, i had my heart set on catching one of the big roach which reside in one of the deeper swims. Just as it became too dark to be able to see my float, i felt a tightening of the line and the thumping knocking feel of a good roach on the end of the line.
I wasn’t disappointed to catch this lovely fish. 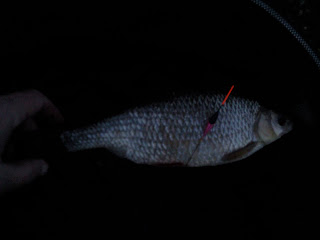 Walking back upstream through the gloom towards the car, my mind wandered to another favourite stream – The Irk.
I think I shall have the last two hours of daylight there tomorrow. It would be such a shame to waste my remaining maggots. 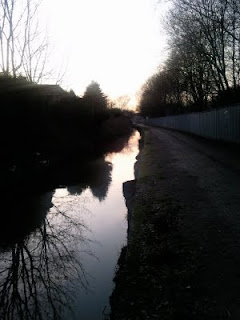