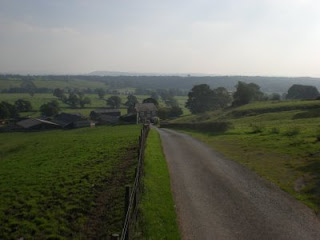 After leaving the city, driving up the M6, then hitting an A road, then a C road, then a single track lane, i have the pleasure of this uplifting view over the Ribble valley, and a wonderfull sense of anticpation as we drive down the farmers lane towards the river. Friday was no exception, as Tony and I made our way to fish the river, Tony for anything that swam, and me for the chance of a Salmon.
After the August monsoon, the river was now running at what i consider to be normal summer levels. This meant that the swims at the top end of the beat which Tony prefers, were now at their best. So i bit the top end of the long run with a small mepps and worked my way downstream towards Tony – who had stettled into what i consider to be Position A with his stick float set up.
Whilst the river conditions were virtually perfect, there was hardly a breath of air and the sun was shining brightly- not ideal weather conditions for float fishing – or salmon fishing for that matter.
To cut a long story short i didnt get a sniff of a fish in that pool, or for that matter in the pool i usually fish at the tail end of the beat.
We stayed til dusk, and whilst i am running on any fish is a bonus mentality and didnt really expect to catch, Tony really struggled despite trying a variety of swims. It wasnt until after the sun dropped that Tony started to get into the fish, and he ended the evening with a few fish.
Back on the salmon quest, even though i didnt catch, i saw a fish moving in the pool so my casts were in hope rather than a futile gesture. I have seen fish rise in this pool every time i have fished here. The water levels were a good 2 feet lower than my last visit, and the shingle bank was very much exposed. I even had the good fortune of finding a flying c i had lost a fortnight ago, embedded in a clump of weed. Thats £1.74 i dont need to spend again. 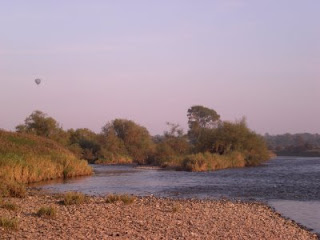 River levels are too low for salmon to be running, but there are fish in the river, and its only by being there and fishing that i will be lucky enough to to catch one. There is no rain forecast in the near future but who cares, just being on the river bank in good company makes for a great day, and i’m lucky enough to be having lots of great days.
manchester fishing Irwell Ribble Trout