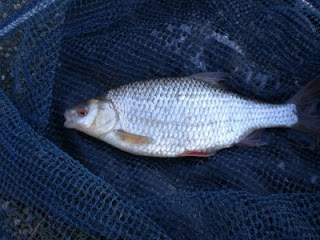 I started this blog a year today as a bit of fun, and as a means to encourage me to get out a bit more. I can say without reservation that in the last 12 months I’ve had loads of fun, met some really great people and most definitely got our a bit more!
Whats more addictive fishing or blogging? Well the answer to that is an easy one – fishing of course! – or is it blogging?
Last year i set myself a little personal challenge, to catch as many species of freshwater fish as possible. The only species that eluded me were Silver Bream and Zander, neither of which are found in the North West of England. I had great times out on the river banks with Phil, Tony, Big Dave and others, catching my first ever grayling, barbel and Salmon. From minnow, bullheads and stone loach through to larger fish like pike and carp – i thoroughly enjoyed catching them all.
Another beneficial result of my blog was that rather than sticking to my usual haunts, i took the opportunity to explore new waters, both still and moving – after all you wouldn’t really enjoy reading blog entries about my 50th visit of the season to Sandybank Lodge. I had never fished the lower Ribble before and am now i awe of this lovely river. Having fished the Irwell, on and off for years, last year i took the initiative to explore other rivers in the Mersey system, and was well rewarded for my efforts. Joining Wigan Angling Club, was a good move and i look forwards to fishing some of their excellent still waters in the coming year.
My ambition for this year is to catch a barbel out of my local river, The Irwell. This might sound like an easy task, but there are so few of them in the river that it will be a really tough challenge. There are very few reported captures, and to the best of my knowledge a couple of hundred of them were stocked about 10 years ago, and they are rarely seen let alone captured.
After having a really busy time at work since the turn of the year, i haven’t really had the opportunity to get our fishing for more than a snatched couple of hours on a sunday afternoon, so this weekend is a real treat as i have nothing else planned other than fishing.
I started out this morning plugging for pike on the lower river. The water was a couple of feet higher than normal and a filthy brown colour – not the best conditions, and i will happily blame the conditions rather than my lack of skill for the ensuing blank session. I have yet to catch a pike from the city centre swims which is frustrating as there are some real crackers in there. Hopefully this will be another thing i can rectify over the coming year.
After a quick trip home for some lunch and a warm up, i made may way up the motorway towards Tonys, to try my luck on the little stream which runs nearby. This little stream has really captured my imagination, as the fish that inhabit this little water are incredibly beautiful. The roach are a decent size, deep bodied red finned and fight like demons, mixed in with the roach are some beautifully marked brown trout, which go like the crackers on the light tackle used to catch roach. In the area i have been concentrating on, there is a large shoal of roach which go to over a pound, and i am determined to put together a decent net of these fish soon. It wasnt to be this afternoon, as i caught 3 small trout and only two roach on caster (the larger of the two went to about a half pound). 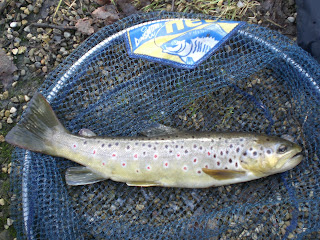 Thanks to everyone for your encouraging comments as your comments often give me food for thought and help me catch more. I have had the pleasure of meeting many readers of my blog this year, its amazing how our sport attracts such great people. For those of you who live nearby but have never got in touch – please do – i might try and nick your swim but i dont bite!