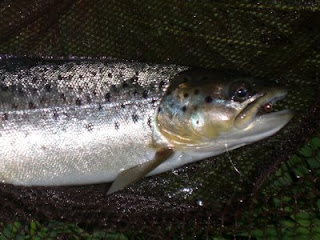 As the evenings lengthen its now fairly easy to finish work, eat supper and then have a few hours on the river. I’m lucky enough to live by the river, so later in the year when the coarse season re-opens I can walk out of my back door, walk through the park and be fishing within 10 minutes. As theres not that many trout in the lower reaches I drove upstream to have an hour or so in the area thats so popular with canoeists.
Other than this nice 10inch brownie from the lowest pool, but didnt have any other takes or see signs of any fish rising for the remainder of the evening. The comments of a passer by who informed me that he had whitnessed a chap with 8 small fish on the bank next to him, has confirmed a feeling I’ve been getting all season – the fish just arent there anymore. Maybe its the credit crunch and people see these fish as a nice meal, but i would be more than a little concerned about the levels of lead, cadmium, pcb’s etc which no doubt have made their way from the riverbed into the food chain, to eat fish from a post industrial river. Maybe if more people knew that there was once a cyanide factory only a mile or two upstream they might choose something else for dinner!
manchester fishing Irwell Ribble Trout