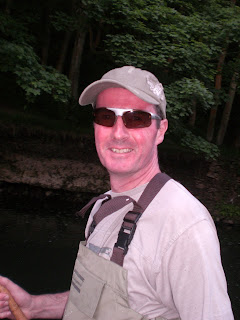 This weekend i was lucky enough to be able to fit three fishing trips in. My first venture was a return to the swim on the Manchester Ship Canal where i had bagged up on roach last week. This week however i turned up but the roach didnt. I struggled to get bites but stuck it out for a couple of hours to catch 4 small roach and a chublet.
Sunday morning saw me fishing at dawn again with Neil at Salford Quays for Pike. Over the last couple of weeks it has been noticeable that the Pike feed as night turns into day, and that once the sun is up the pike stop feeding. Today was no different, and i took this nice little fish at about 4.15am. About half an hour later Neil hooked into what he thought was a small fish, so passed the rod to his girlfriend Tez who was accompanying him. She made a good job of playing the fish which stayed deep for 5 minutes or so to the net. It was only when the fish rose up in the water the we could see that it wasnt a small fish at all but a broad shouldered pike of at least 15lbs. As is often the case once a fish sees the landing net in the water, it spooks and finds an extra reserve of energy – in this case, as the fish turned its head away from the net the hooks pulled and a lovely pike zoomed back down into the depths. By 5am the sun was shining on the water and the pike stopped feeding. We fished on until 9am but didnt have any more runs. 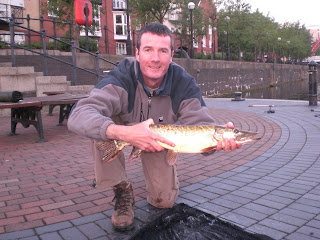 To keep myself occupied i set up a slider rig on my waggler rod and had a go at catching some small roach and perch. The water on this particular quay turned out to be 24ft deep only one rod length out! I caught quite a few little fish but nothing of any size to report.
In the evening i had arranged to meet Tony on the river for a short session. Tony had tied up a few Oliver Edwards caddis patterns which he had used with great success midweek so i was looking forwards to trying them out.
On arrival we decided to walk up to the furthest away runs and then make our way downstream back to the car.
However for some reason once we started fishing we moved upstream through some delightfull pools and fished water we had never visited before. I found this great fun, and it more than compensated for the large amount of trees i was catching and the few fish i was hooking. 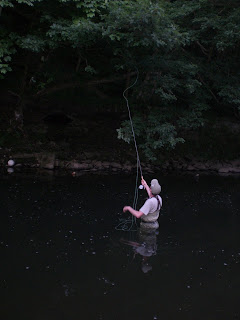 I did manage a few takes and to land a small brownie, but to be honest i was knackered and should have gone home to bed.
As we reached the pool which was at the head of our allowable beat, Lucia decided to come and visit us which was great as she could save us a long walk in our waders and drive us back to our starting point.
What poor old Lucia didnt realise was that two big guys in wet waders in a citroen saxo would create a vile stink of the type she had never smelt before. Therefore she drove like a nutter with all the windows down to make her experience as short as possible. As she left us at 9pm i promised her that i would only fish for another half hour but at this time of the year the twighlight seems to last for ever and we fished on until 10.15pm! Tony took a nice brownie from the car park swim, but the fish which were rising, seemed preoccupied with some form of fly and werent really interested in our offerings.
I have a busy work schedule over the next couple of weeks so my fishing activities are going to be curtailed to some extent. I have however booked myself a day off to fish with Phil on the Ribble on the opening day of the coarse season – i cant wait.
manchester fishing Irwell Ribble Trout