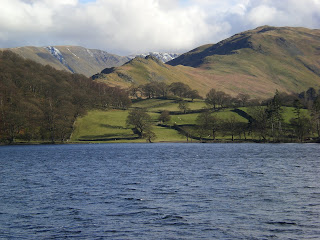 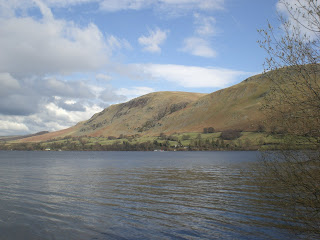 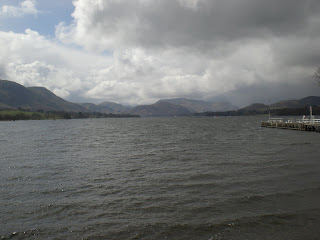 Today I took a trip up the M6 and visited the Lake District for the first time this year. In all the years i have been visiting the Lake District today was the first time i have taken a fishing rod with me and for a large part of the day I wished that I hadnt bothered this time either.
The day got off to a bad start as the heavens opened as soon as i turned off the carnignition off at Howtown. Then things got worse, as the bay where i had orginally intended to fish had a new fence around it and signs saying private foreshore (whatever happened to the right to roam!). Undetered, i humped my gear to sheltered spot near a headland, and set up. Method today was chopped worm feeder with a popped up lobworm tail as hookbait.
Four hours biteless hours later i was on the brink of packing it in for the day. However, by this time the sun had made an appearance and i was now in two minds as to climb up to one of the high tarns for a nosey around, or to fish from a new spot until dusk.
I had time to decide as i had to drive around the lake, and unsurprisingly the opportunity of fishing from a new spot and not going home having caught no fish won out.
After an hour or so i had a knocking bite on the tip, which i decided to let develop, as always a bite left to develop resulted in no more tip activity, i wasnt too brassed off as hey this was my first bite in 6 hours! Next cast i didnt make the same mistake and a lovely little wild brownie hit the bottom of my landing net. 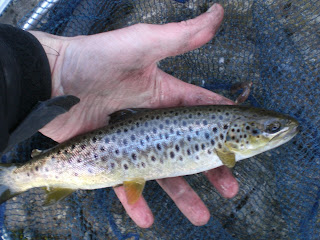 I would like to go on to tell you that i proceeded to catch fish after fish from then on, but sadly that was the last bite of the day. Re the above photo – i have big hands lol.
The scenery in this part of the Lake District is less rugged than that of the Wasdale and Borrowdale areas, but the late day sunshine made it hard for me to concentrate on the quiver tip, as my eyes were in awe of the spectacular scenery. Now i know that the fish in this lake are so beautifully coloured and marked, i think i will make an effort to come a couple more times this year, maybe next time hire a boat and fly-fish or troll some spinners.
manchester fishing Irwell Ribble Trout