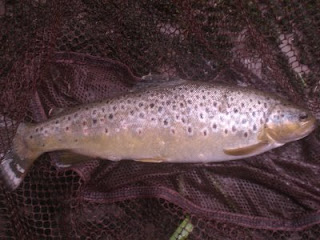 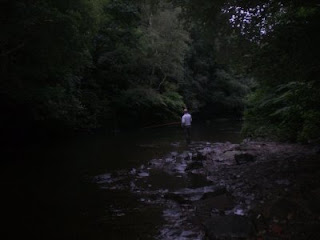 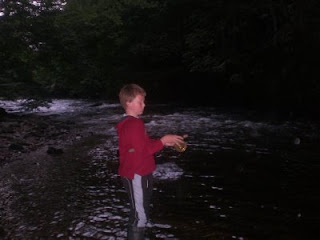 I have been promising to take James, one of Matthews rugby friends and his dad Paul fishing for trout on their local river for ages now, and the last week of the school holidays was the latest time of the year that this trip could be realisticly done.
James and Paul have been to the local commercial fishery with me when Big Dave where we made sure that they caught more fish than they had ever seen before. However Paul was keen to catch some trout, and i think that he is eventually going to take up fly fishing.
As with all beginners its important to take things one step at a time, so this evening float fished maggots were the tactics employed as i think its important not to introduce to many new concepts all at once. Both James (age 13) and his dad are competant enough to set up there own rods and tie a few basic knots, but this evening i gave them some of my pre – tied rigs as i wanted to maximise their chances of success.
We only fished from 6 til 8 but i took them to a couple of good swims and they had lots of bites, lost a few fish and banked a few too. 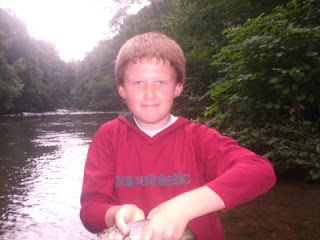 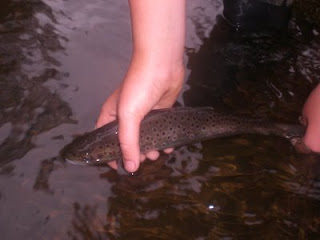 None of the fish caught were over a pound, but beautifully marked and very plump. Paul in particular was amazed to catch such cracking little trout from a river once so heavily polluted.

As the evening drew to a close, we were joined by Derek, one of the few people i have met fishing the river. We met only a couple of weeks ago, when we were on opposite banks of the river. A shouted conversation and a few text messages were all i knew about Derek, but to see him close up i now know he isnt as scary as sounds (only joking Derek – hopefully we will get out fishing together soon).

Our two hours flew by and i reluctantly had to go home. Even though i didnt fish myself i thoroughly enjoyed showing two keen beginners a few of the ropes. James caught 3 and his dad two. The swims i chose to show them are close to their home, but they had never seen this part of the river before,and as we packed up i gave them a few of my pre tied rigs on winders which i am sure will be stretched out by some lively trout over the course of the next few weeks.
As they become more experienced i will be able to take them together with Matthew and maybe even do a little fishing myself. It will be good for Matt to have someone his own age to go off fishing/exploring with.
manchester fishing Irwell Ribble Trout