I arranged to meet Paul at 11am on Kingfisher Lodge and by the time I arrived he had very kindly made a hole in the ice just big enough for two. 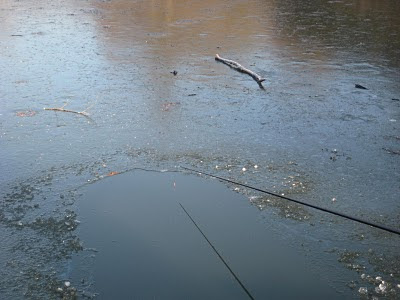 Fishing a short flick tip whip, a size 22 hook, 0.08mm hooklength and a dotted down float i set about winkling out a few roach to use for wobbled dead baits later in the winter.

The very subtle differences in between our rigs made amazing differences in our catch rates with Paul initially catching about 5 fish to every one of mine, even though our floats were less than three feet apart. Once i added another section of pole and fished in slightly deeper water, with my hook bait an inch above the deck, I immediately started to up the numbers i was catching. Paul by this time was fishing a few inches over depth and found his bites starting to tail off.

Swapping between pinkies, punch and casters and experimenting with different presentations we caught steadily for a few hours until the cold had numbed my toes.

Our joint catch of fish was less impressive than it should have been as a hole in the keep net meant that we were fishing a form of catch and release. 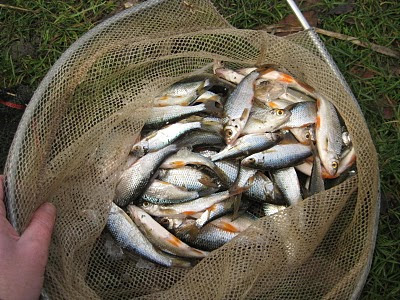 A good little session – though most of the fish were too small to be of any use as wobblers.