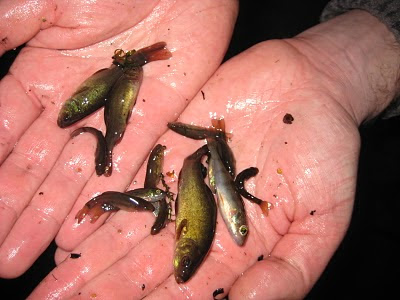 I’ve bought a few bits of new tackle this week from ebay (bargains!) so was keen to get out for a few hours this afternoon, and give them an airing one of the lakes behind my house.
A new pole was the first new item to be test driven, light as a feather and lovely and stiff – so different from my last long pole back in the day….. an Ian Heaps 9m pole which weighed a ton, and bent like a banana. I misjudged the elastication – and ended up with the elastic far too tight – so bumped off a good 50% of the tiddler roach and rudd which reside in Kingfisher Lodge. I still managed a good few pounds of fish during the course of the afternoon.
I’ve also bought myself a set of bite alarms, so that i can fish with a “sleeper” rod more effectively. A simple worm and bomb rig didn’t get a bleep all afternoon. Though my partner for the afternoon Paul hooked into a jack pike of a couple of pounds on his worm and bomb rig.
On the way home at the end of the day, we passed by Drinkwater Park Lake, which as i have told you in previous posts was thoroughly netted by a departing angling club a few years back – and is now a long way off most peoples fishing radar. As its less than 5minutes from door to lake, i often take a walk around “Drinkies” and its a very rare occurrence to see any fish moving or surfacing. Paul assured me that the place was alive with small tench but to be honest – i thought we was pulling my leg. So i didn’t expect the haul of tiny tench which came back from only a couple of sweeps through with a landing net. Lets hope they grow on – hopefully Drinkwater Park Lake will once again become a great fishing venue. 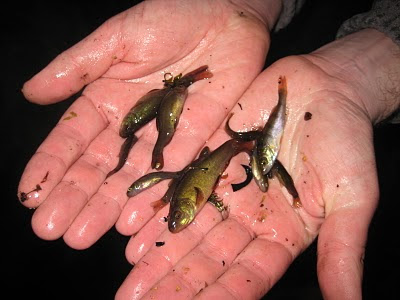