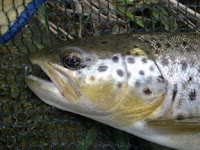 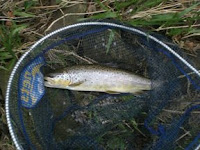 Tony, thanks for the advice and thanks for the flies.
By the end of this evenings session i had two brownies and 3 missed bites.
The river was a normal height and running clear. There was evidence of the recent iron salt pollution in the pools at the edge of the river, but the aquatic invertebrate life doesnt seem to have been affected. Hey whats a bit of iron poisoning when you swim in a river thats contaminated with lead, mercury, pcb’s etc.
The first fish came just as Phil arrived and i caught it in the car park swim on the point fly you gave me on Tuesday.
The second fish came on my last cast of the night to a snipe and purple on the dropper, and rose to the fly as the fly hit the water – great stuff!
I am amazed as i thought i was going to blank for weeks.
Pity the weather forecast for this coming weekend is so bad – lets hope they get it wrong again. 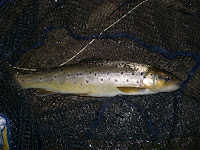