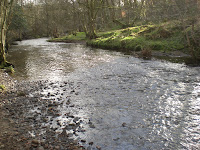 As the new game season is about to begin, i have been weighing up my options as to which rivers i am going to concentrate my efforts. My local river was once heavily polluted but now its tributaries support healthy populations of brown trout in their upper reaches, and as most of these waters are within half and hours drive of my office then it is only natural that i will be concentrating my early season efforts on this river and its tributaries.
I have not fished using a fly line on a river before so this is going to be an exciting couple of months for me as i learn to winkle trout out of these small rivers and brooks.

This afternoon i had a walk along a small brook, which runs from the Western Pennine Hills. I have fished this stream only once before, when i had half an hour in two swims without any luck. However next time with a little more stealth, guile, and experience hope to unlock a few of its secrets.

The rights to fishing on my local river are very fragmented with many areas being uncontrolled by any angling clubs. I have been told that one of the clubs is about to give up its rights due lack of interest from its members! Should i be so amazed that people dont want to bother with learning how to fish on the river when there are so many commercial fisheries available.

I have fished the upper reaches of the river with Matthew and caught some lovely brown trout on wet flies controlled by a bubble float, so i am hoping for similar success with a fly line. Once the clocks change at the end of the month i hope to get in at least two evening trips a week.

After chatting to Phil and Tony yesterday and listening to their views and experiences of different rivers in the North West, I have been convinced that joining Wigan & District Angling Club will give me access to a great stretch of a different, larger river which holds good numbers of both coarse fish and brown trout for a reasonable price. So its small brooks for midweek and powerfull river for the weekend – Bring on the 15th.