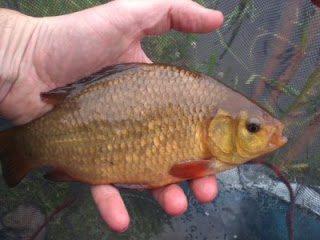 As i have recently purchased a season ticket for a local club so that i can fish their river beats, i also now have some new still waters to fish.
So as i hadnt caught a crucian carp yet this year i asked Tony which of these new waters would be most likely to produce one. Square Lodge was the reccommended lake but Tony gave the caveat that it was a shallow, weed infested, litter strewn scrote magnet.
In order to minimise the scrote factor i decided to have an early start, and arrived at the water at 5am. The lake was nothing like what Tony had described with no excessive amout of weed, well maintained pegs and no litter, all in all it looked like a really pleasant spot to pass some time in the pursuit of fish.
As well as finding my surroundings agreeable i found that the fishing was absolutely top draw. I caught lovely rudd and roach on the drop, hand sized skimmers from the bottom and a few lovely crucians. I have always enjoyed crucians, with their delicate bites, and nodding fight where the swim around and around in ever decreasing circles. I caught steadily all morning, but in the early afternoon, as the sun came out the bites dropped off so i called it a day. 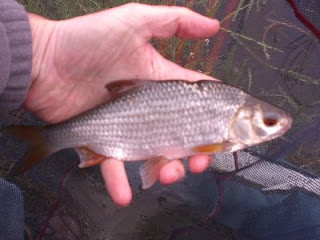 The low point of the day was again losing a good fish. I hooked a powerfull fish which sped across the lake, again my float pinged back at me with only a large fish scale on the hook – probably a carp.
I try not to dwell on things when i lose a good fish, but i am now getting frustrated as i am hooking decent fish, but have become incapable of landing them.
After the trout fiasco earlier in the week, i have stepped up the strength of my hooklengths from 0.10mm to 0.13mm. The difference in breaking strain has therefore gone from 2.5ls to 4.5lbs. I thought this might have the effect of reducing the number of bites i had ( a throw back to my youth when most of my fishing was done on gin clear canals), but today proved that this step up in hooklength diameter has had little effect on the number of bites i get. In future i will start off strong and only go lighter if desperation strikes.
I found today i was bumping off alot of fish (mostly skimmers), and am worried that i being too heavy handed when playing fish. My goal for next time is to land all the fish i hook – this could result in me having epic 10 minute scraps with even the tiniest minnows!
Tony joined me later on in the morning and used pellet to catch some lovely crucians to well over a pound. He was amazed at the transformation of this little lake since the last time he came,as its so close to his house i am sure he will not be leaving at long between visits. 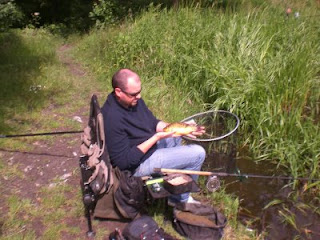