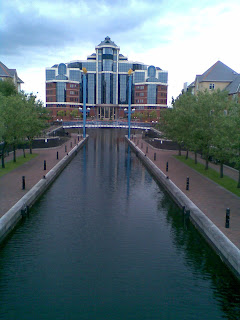 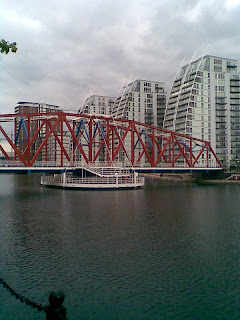 After seeing such beautifully marked pike in the quays during the last week or so, i lay awake last night unable to sleep thinking about how i might catch them. The fish are just too visible and enticing for me not to go back and have another go.
So after work i made the short drive to the quays and got out my spinning gear again. Yet again i could see numerous pike of various sizes holding station in the water. Yet again i couldnt get a sniff of a take or follow out of any of them. I havent been so frustrated since trying to catch my first carp out of Bowker Vale when i was in my early teens (the crafty buggers used to hoover up all my loosefeed and groundbait and not even sniff the hookbait). This was the scenario at the quays this afternoon. I could draw lures within inches of the pikes mouth and get no response at all. I must have cast to at least a dozen pike with no reaction other than slow disdainfull retreat from any of them.
I was watching a guy catching perch, and every time he hooked a fish the pike charged in to try and pinch it before he could land it. This leads to believe that live bait could be the answer to this venue. This proved to me that the pike would feed or that their attack response could be triggered given the right circumstances.
I am relieved to tell you that i didnt blank. I caught a crazy perch on a flying condom spinner which was the same size as the fish! 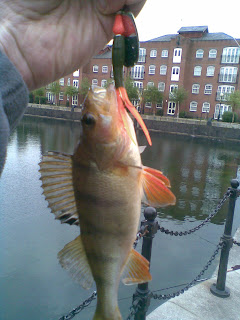 Phil could be right when he says that the perch might respond to small spinners, but i tried a couple of variations of size 2 mepps without a look from any perch. They may be attracted by the red tail of the flying c. Next time i might try tying some from of red tag to the hooks for the small spinners.
And the connection to the school disco ?
Lots of beauties but never a pull.
manchester fishing Irwell Ribble Trout