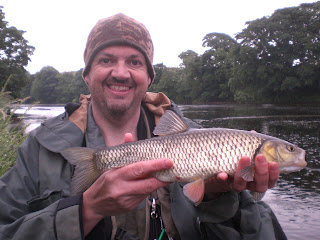 After having spent a couple of days working from home whilst my house has been invaded by builders, plumber, plasterers and electricians it was a welcome respite on Saturday evening to spend a few hours on the banks of the Ribble with Tony.
We were both looking forwards to revisiting the swim in which we had so much success last Monday. When we arrived i was shocked at the numbers of anglers lining the banks. Most of these guys sitting behind quiver tips rods and bite alarms and the scene was more reminiscent of a carp puddle than one of the Norths premier rivers. No matter how hard i try i still cant get the rationale of the bivvy, pellet, bite alarm world. As we walked upstream from the car park to the swims we wanted to fish, the number of anglers thinned out – presumably its too difficult to carry vasts amount of gear over a couple of stiles and 500yds of river bank.
After midweek rains the river had obviously had a good flush through and there was far less blanket weed to contend with. Water levels were up a good couple of feet from Mondays visit and wading was more difficult.
I settled into the swim that had been so productive on Monday, and was soon into a lively chub of about 3/4lb. Despite playing about with my rig, depths, weights and speed of run through i couldnt tempt any other fish into taking my bait. I was a little dissappointed as i thought that this was a cracker of a swim, as had been proved earlier in the week, but i wasnt too surprised as this is only my second visit to the Ribble and its so different to the Irwell where i usually fish.
In contrast to my limited success Tony caught a succession of fish from a swim 100yds downstream of me. He had a couple of lovely chub, the largest 4lb+, some great dace and a wild brownie. I enjoy watching Tony fish, as despite his very simple tactical approach he has a very skilfull technique when searching the drifts, runs and eddies of the swims he fishes in.
On reflection i feel as though i could have done no more in the way i worked the swim with the float and bait, but think i got the feeding completely wrong. I had a bait dropper in my bag but didnt use it, relying on loose feeding instead. The extra flow and pace of the water probably washed my loose feed out of the swim before it even got halfway down through the water column. Using the bait dropper would have got my loose feed down to the river bed and given a reason for fish to feed in the channels i had chosen to fish. By allowing the loose feed to wash down the river in the strong flow i gave the fish a reason to scatter and follow the bait. Hopefully Tony got the benefit of this as the loose feed washed into his swim!!
Phil and Tony swear by the use of a centre pin reel in this form of float fishing as a bait can be held back smoothly through the swim by using pressure from the thumb against the drum of the reel. I was using an open faced fixed spool reel wich results in line being released in an uneven jerky manner. Its small issues such as this which can result in a fish accepting or rejecting a bait and i am finding out the hard way. I am going to have to have a search on ebay and get myself a pin.

We fished on until 10.30pm as the twilight seems to last for ever at this time of year. As we walked back down the banks, the bivvy boys were settling down for the night with beta lights and alarms glowing and primed for action. We asked a few of them if they had been successful, with only one of them reporting having caught a fish – an eel of about half a pound. This made me feel a little better about my limited success, but those of you who know meknow that i am not fazed by a lack of fish as i enjoy fishing just as much as catching fish.

I really enjoyed my evening out, despite the rain the chat in the car is always about venues, tactics and fishing disasters – great fun.
manchester fishing Irwell Ribble Trout