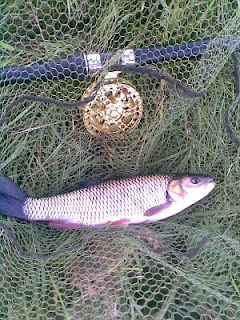 Tonight i tried out a new tackle combination which was forced upon me as on arrival at the river bank, i opened the boot of the car to see all of my gear minus my rod. Not the best start to the evening. As so often happens midweek, i am so eager to get out of the office and onto the rivernbank that sometimes i forget an item of equipment, tonight it was my trotting rod. Tony was in fits of laughter at my predicament, as its a 70 mile round trip from home and he knew i wasnt going to go back to fetch it. He did very generously offer to share the use of his rod. But.
Tony couldnt believe it when i pulled a 1oft telescopic beach caster out of the boot, and told him that i would use it to bounce worms and a drilled bullet down one of the faster runs. A new technique – beach caster and pin. Not the most sensitive set up but i caught a nice chub on my second cast !!
I couldnt believe it myself actually, as i thought i was going to have an evening enjoying the view. This particular rod only sees the light of day when i go away on holiday as it packs neatly into my suitcase. Thankfully i have been a lazy bugger recently and not yet put it back in its normal resting place after my recent holiday.
Tony caught a nice barbel of about 5lbs from the “hot” swim, whereas my fish came from what i am from now on going to call the graveyard swim – its new name comes from the fact that its full of snags and sharp rocks and i have never landed any of the decent fish i have hooked into in this swim.
It wasnt the most productive evening, but as ever thoroughly enjoyable. I now have an unused pint of maggots in my bait fridge so it looks as though i will have to go fishing again this week, as i hate waste, what a shame. Lets hope it doesnt rain too much and i will be able to have a crack at one of the swims on the Irwell that i havent been to for a while and am beginning to miss.
manchester fishing Irwell Ribble Trout