After spending the weekend gardening I was itching for some sort of fishing related activity this morning so after going through my Monday morning emails, the weekends post etc I made a coffee, sat back from my desk and called Phil and Tony to see how they had got on over the weekend. If i hadnt made it out fishing then i could at least listen to how my friends had got on. Tony had been out fishing with his father and young son (lots of tangles and an early finish)whereas Phil-K had had a close shave with an incontinent wood pigeon. After arranging an afterwork session for Tuesday with Phil I decided to have a walk around the Quays during my lunch break to see if the fish had started to make their spring migration into the shallower docks.
On arrival i was immedialtely met by the usual suspects, hordes of 3inch perch shoaling around the underwater features. A good walk around saw some nice Pike basking in the sunshine, and some of the resident tench and bream doing likewise.
At the end of my short walk around i came to the basin where the canal interlinks with the larger deeper quays. I was lucky enough to spot a shoal of nice roach and rudd and spied a few real crackers lurking about underneath their smaller cousins. I had left my fly tackle in the car after last weeks short trip to the Ribble so i knew i had time for half an hours fishing before my afternoons appointment.
Using a glass bead bloodworm pattern on a 15ft leader i caught my two first coarse fish on fly tackle. This amazingly lively baby pike, and a roach of about 8oz. 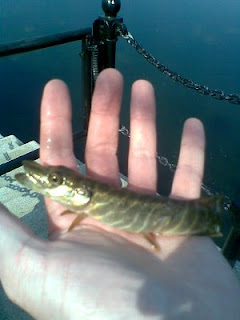 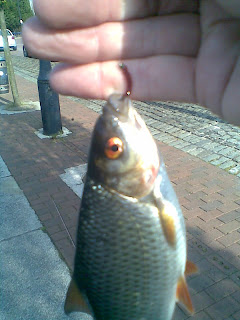 My use of fly gear certainly drew a few amused glances from the office workers, and i as my casting position was a good 10ft above water level, i had to improvise with a sort of underarm roll cast.
I’m really looking forwards to a few evening sessions in the next few weeks, as the quays are a difficult place to fish later in the year once the pond weed really gets going.
manchester fishing Irwell Ribble Trout