Due to the current appaling weather conditions i decided to have another day at Bradshaws rather than fish a more difficult, exposed venue. If i was going to sit out in a howling gale then at least i would catch some fish rather than struggle for bites on a different venue. I arrived early with the intention of fishing the same peg on lake 6 that i tackled a fortnight ago, but using slightly different/improved/refined tactics. However there was a match booked on lake 6 so i fished a sheltered corner of lake 5.
I started off fishing hemp and caster about an inch off the bottom and had 2 good roach with my first two casts. These roach were followed by skimmers to 12oz, roach hybrids and roach to 12oz and a couple of monster gudgeon. I was having a great mornings fishing feeding about a small handfull of hemp and a dozen casters every other cast. 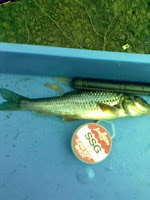 At lunch time the heavens opened and the bites dried up. I swappped to hemp on the hook with no success and then red maggot. As the rain eased off i decided that a change of tactics was in order and started to heavily loose feed red maggots. I shallowed my rig by 3 feet and fished at about 1/3rd depth. The response was immediate with 3 chub of about 8oz and some more decent roach in the next hour. Again the bites tailed off so i reverted back to full depth using red maggot as hook bait. This resulted in bites from small roach and perch. For the last hour i alternated my hookbait between hemp, caster and red maggot but only caught small roach on maggot.
I was expecting to catch a better stamp of fish today by using hemp and caster but it didnt work out that way. However by 4pm i had caught lots of fish and was ready for home. Despite of the weather i had a good catch of roach, skimmers, perch, chub and gudgeon. It was nice to catch my first gudgeon and chub of the year, i think i will be lucky to catch gudgeon of that size anywhere else this year. 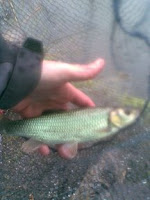 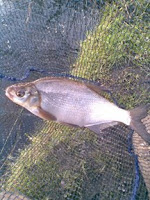