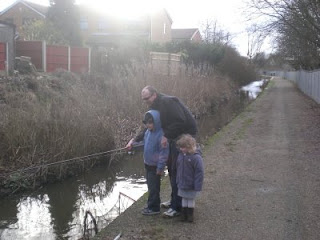 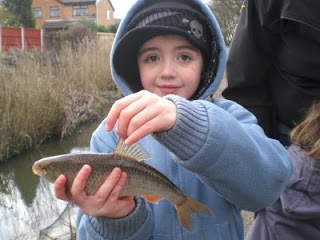 Family time was my priority this weekend. Yesterday was spent walking around the Lune Estuary, and this morning watching Matthew playing rugby. This left me only an hour and a half to fish this afternoon.
The stream near Tonys house is virtually guaranteed to provide some sport, no matter what the weather so this is where i found myself at three o’clock this afternoon. Despite a gusting northerly wind i was hopeful that now i was beginning to master the “method” for this piece of water i might beat the weather and catch a few fish.
As i was tackling up, Tony and his two youngsters came walking by and its wasn’t too difficult to persuade Tony to have a few casts with my gear. He took a lovely roach of about 12oz before i cajoled his seven year old son Logan into having a go. Once Logan had caught a fish there was no stopping him, like father like son “one more cast dad please please just one more” then after that ” another one dad, just one more”.
It really made me laugh, even though he was freezing cold he wanted to stay and fish. I think if it wasnt for the fact that little Scarlet was freezing cold, they would have both stayed til dark. Definately Tonys mini me.
After they left i caught four more nice fish in quick succession, but then lost a cracking roach which straightened out my fine wire hook (a B511). I saw the fish in the water as i had it close to the net when the hook pinged out – it was well over the lb mark which is an amazing fish for such a small stream.
Loosing this fish must have spooked the shoal, as i didnt get another bite for the next half hour or so. As the light was fading, i searched up and down the pool to see if i could locate fish, but had no joy. 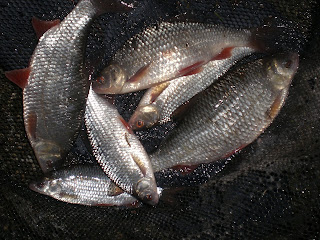 The discovery of this stream has been something of a fishing revalation – if you look at Tonys blog, the fish he catches here are amazing considering the size of the river.
Phil-k spent this morning at Pendle View Fishery and caught 14 fish on flies he has tied himself – well done Phil. I am going to go next week with him, and will have to spend some time at the vice over the next few days creating some of my own!
manchester fishing Irwell Ribble Trout