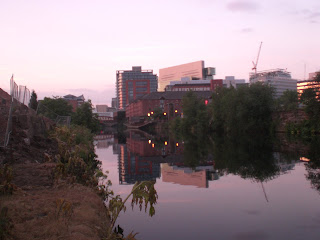 I spent a very enjoyable evening in the company of Nick, author of Angling For Something. We had arranged to have a plugging / spinning session after work for the large trout that allegedly inhabit the Ship Canal. I originally planned to take a second rod which i would use to suspend a team of buzzers beneath a bubble float, but as i finished work later than expected i didnt have time to organise my tackle properly so only took my lure fishing gear with me. A decision i would later regret.
When we met up Nick had brought two rods, his spinning gear plus a fly rod, with which he hoped to catch some of the many freely rising fish which can be seen along this stretch of water.
It wasnt long into our session before Nick put down his plugging gear and started to fish a dry fly.
The photos below illustrate his virtually immediate success. 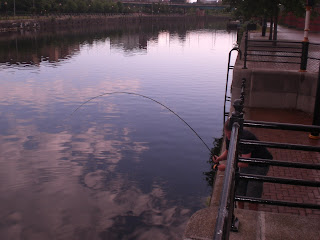 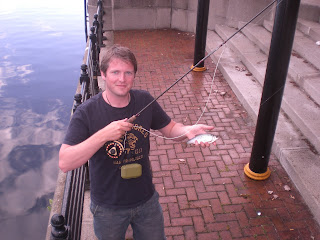 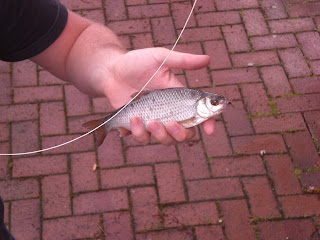 However this proved to be the only fish of the evening. We fished fronm 6 -10pm but didnt have any more luck. I stuck to lure fishing whereas Nick alternated between his lure rod and his fly gear. We explored a mile or so of the canal bank all the way to Potato Wharf and beyond into the city centre. We saw a nice carp topping in one of the side basins, and lots of small roach rolling and topping in the main canal, unfortunately we saw now evidence of the large pike and trout which were our intended quarry.
To be truthfull, I am getting pretty brassed off now with lure fishing as i am having no luck at all using this method. The last time i caught a fish on a lure was a jack pike back in Febuary on a spinner when the river was in flood.
I have a box full of about 30 different lures and i have used them all on trips during the last few weeks with Matthew, Lucia, my father and now Nick. Whilst i really enjoy time on the bank, and the company of the people i go fishing with it is important to me that i catch some fish.
With this in mind i am going to put my lures away for a few weeks and dust off my old rod pod and alarm set, in order to attempt to catch a couple of larger fish. I am sure that there are some really large specimens in the Ship Canal and it will be fun trying to see if i can catch them – watch this space!
manchester fishing Irwell Ribble Trout