As you drive along the M60 from Prestwich to Swinton – Kingfisher Lake is the first lake that can be seen through the trees on the left hand side.
If the truth be told, its not my favourite venue due to the noise from the motorway and as a consequence I rarely visit. In fact – so rare are my visits that i realised its 25 years since i last wet a line there.
The council are currently spending alot of cash in the park improving the paths, so during a sunny afternoon last week i had a cycle around the park, checking out a few of the lakes and trying to spot a deer (no luck on the latter).
I know there is good fishing in the three other lakes within the park, not including Drinkwater Park Lake – which has not yet recovered from one of the local angling clubs netting the place and removing all the decent fish to one of its private club waters -grrrrr. So after having a look around the three lakes nearest to my house – i had a cycle around Kingfisher Lake and was pleasantly surprised to see fish topping.
This gee-d me up to have a walk over there on Sunday afternoon, armed with a pole, a loaf of bread and my pike gear.
Using bread punch fished at mid water and Liqquid bread as feed i caught a small roach a chuck for the whole 4 hours i was there. I tried using bread paste and larger lumps of bread flake, but could do nothing to get through to any decent fish.
I cast out one of these little roach as livebait under an old fashioned bung – using a baitrunner reel to give some extra bite indication, but I didn’t get a touch from a pike and the little lip hooked roach went back none the worse at the end of the day.
I did catch a solitary small Rudd amongst all the roach so at least i can up my total by one for this years species list (race/competition with Phil).
It could be another 25 years before i return to Kingfisher Lake as at least two of the three other lakes behind my house are much better fishing and not as far to lug my gear. 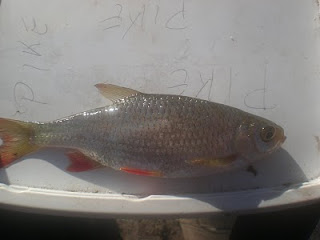