Another few hours on the river after work, and I was joined this time by “lucky” Phil-K.
My first cast was about 6.30pm and I had a sharp pluck within 30seconds of my bait settling in the swim – then nothing for the rest of the evening. Phil K showed up at about 7.15 and cast in about 10 yds below the area i had baited up.
Just as the light was failing his rod tip hooped over, and a fish was on.
Not the Barbel we were hoping for, but as you can see from the expression on Phils face this chub was not unwelcome. It tipped the scales at 4lb4oz – not a bad fish from the dirty old Irwell! 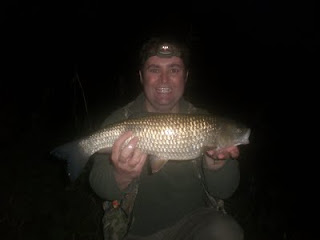 What a smile – What a fish 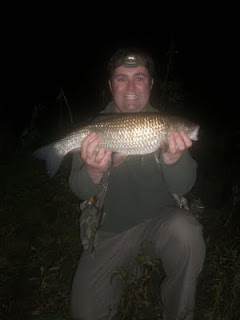 1 bite each – i was still on banded pellet and missed mine. Phil was fishing his pellet on a hair and hit his one bite. I think its time I took the hint.