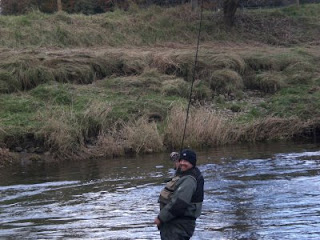 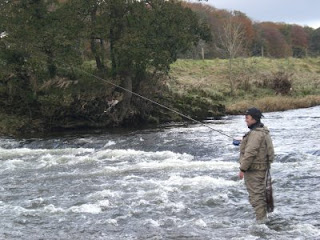 After discovering a hole in my waders on my last outing, i was hoping a bicycle tyre repair patch might prove to be a suitable repair, it wasnt and i got quite cold standing in the river this afternoon. However Phil and Tony kept my spirits up with their good company and mickey taking at my inability to catch a grayling from the Ribble so far this year. On our many visits to the river together this year, both Tony and Phil have caught grayling on a regular basis, both on fly during the game season and today using coarse fishing tactics.
Now that the trout and salmon seasons have come to a close, and we are able to fish some of our favourite swims using stickfloat and pin tactics and i was hoping that my higher skill level using these methods rather than my kak handed fly fishing skills would result in me getting a grayling or two.
Ha ha, not a chance. I caught two out of season brownies in the first swim that i tried, and then two nice chub from a slower swim in one of the wooded sections. Tony and Phil had both taken some nice grayling and trout and every time i hooked into another fish started to make fun of me mercilessly as yet another non-grayling came to the net. 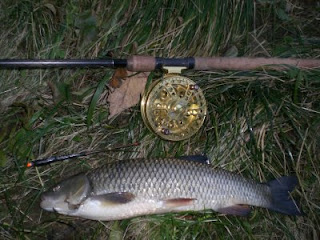 At the end of our short session Phil was in the swim which i considered to be the best grayling spot, and generously let me have my last couple of casts in a run which he claimed was alive with fish!
First run through i struck into a fish which felt like neither a chub nor a trout. The guys were giving me stick big time with Tony claiming that he knew it was a grayling from the way my rod was bending to Phils knowing it was a grayling due to the way my float went down – classic. I had no idea what it was, but it was silver and jumping high out of the water at every opportunity. After a short scrap it turned out to be a lovely little sea trout. Being out of season, it was quickly photograhed and returned to the river. A nice reward for cold wet feet at the end of the day. 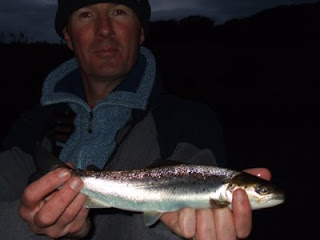