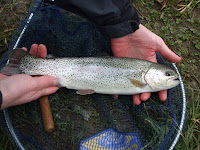 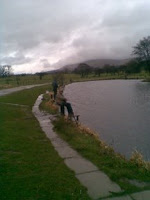 I met up with fellow bloggers Phil and Tony on Saturday for my first outing fly fishing for over two years. I have thrashed many a reservoir with a fly line and lure over the years with no more than limited success. However armed with some home tied flies courtesy of Big Dave and a lake stocked with suicidal Rainbows even a master blanker such as me couldn’t fail – could I ?

We arrived at the lake and tackled up in winds that at times seemed at times to border on gale force. After a few rusty casts with a single white furry lure (which was meant to sink but floated) I had a fish rise to take my lure – in a state of shock I watched rather than strike and consequently missed the fish.

After a few more casts with this lure and no more rises (it still refused to sink) I decided to swap lures to a green damsel fly imitation which hopefully would sink beneath the waves. After half an hour thrashing the lake with these lures i was beginning to think i was going to luck out. Tony and Phil had both already banked fish whereas i was spending most of my time unwrapping line from either around my rod or head.

Big Dave had assured me that his flies were deadly so it was now time to put his words to the test. I swapped the lure for a weighted bloodworm buzzer (photo to come during the next week) I had a pull using this fly on my first cast and caught a rainbow of about a pound on my fifth – thanks Dave!

I swapped flies throughout the afternoon to see what worked, but found i could only catch fish on bloodworm imitations.

The scenery in the Ribble Valley was great with the local fells shrouded in mist, and i guess the fishing here would be great too in more clement conditions. It was a good confidence booster to catch a few fish, as i intend to concentrate on trout fishing during the close season for coarse fishing on rivers. I am going to have another look at Bradshaw Brook on Sunday afternoon and maybe have a walk up the Irwell from Summerseat to Ramsbottom and see what the fishing prospect are like for the coming weeks.

The best part of the day was that we all caught fish, and had the opportunity to try out different methods and combinations of flies.

I enjoyed the company of Tony and Phil and look forwards to fishing with them again. I wasn’t surprised that i enjoyed my afternoon out with them as i have enjoyed reading their blogs over the last few months and can see that their fishing ethos are very similar to my own. I have added links to their blogs so that you can see what i mean for yourself. 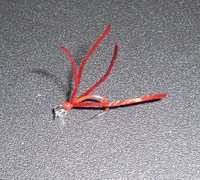