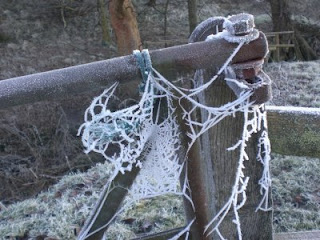 As the seasonal clock slowly turns bringing about colder shorter days, catching fish becomes much harder. On the other hand the cold weather can bring about climatic conditions which can make the fishing of secondary importance to the unique changes to the scenery. Except maybe a dewy morning in early June when can a spiders web look as spectacular?
The fields and trees were coated in a thick covering of hoar, it looks like winter has kicked in early.
A consequence of this it that on the fishing front, finer lines, smaller hooks, and fish that are less inclined to feed have now become the norm.
I spent the afternoon in the icy cold Ribble Valley in the company of Tony. I had another tough day catching only one out of season brown trout. I searched out various swims with a stick and pin approach which might have produced better sport if the weather were a little warmer, but it took until the last half hour of the day before Tony and I figured out where the fish were shoaled up. By then the air temperature had fallen to a good few degrees below zero (minus 5 according to the thermometer on Tonys car) and our day was prematurely ended by our rod rings freezing solid.