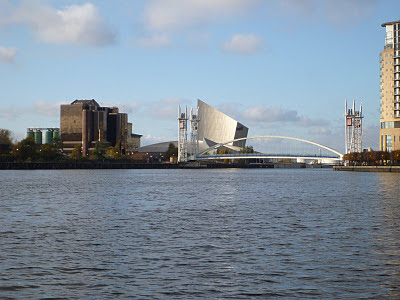 I spent a few hours this morning fishing on the Manchester Ship Canal with Nick and Paul, seeing if we could catch any Pike from near the new Media City complex.
We arrived at about 8am so that we could nab a free parking space, and set up opposite Old Trafford football stadium. Nick and Paul had a couple of dead baits out for Pike, but  I hadnt had time to buy any, so had to try and catch my own using maggot waggler.
It was a cold morning – and I’m getting my excuses in early – you guessed it not a bite or a fish all morning. We went well past our usual two hour rule (no fish no bites within two hours its time to move on) as we were being filmed by a BBC camera crew who were interested in making a short film about the Manchester Ship Canal and the people who use the canal as part of their daily lives.
It was quite a good laugh – and a nice break from work – as you know – any excuse to go fishing even though we didnt catch.